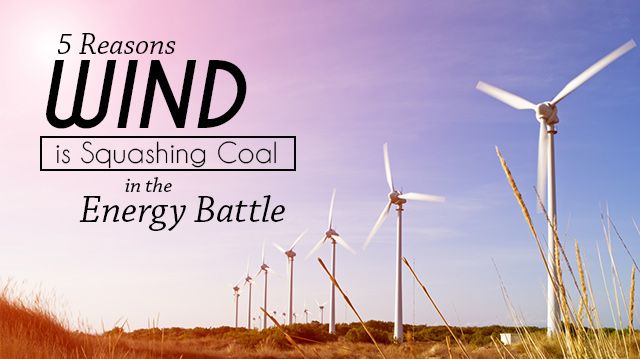 For years, we’ve heard about the need to shift to more “renewable” energy sources. You have probably noticed more solar startup companies installing panels on your neighbors’ roofs. You also may have been struck by the increasing number of wind turbines on your commute to work or a recent road trip. Now alternatives to coal and other fossil fuels are becoming less futuristic and more the norm. As former Vice President Al Gore recently said, at the Climate Action 2016 Summit, “We are entering the era of renewables, and it’s a very exciting new reality.”

Yet coal remains one of the dirtiest energy sources, here and abroad. It’s use to generate electricity is directly linked to global warming. According to nonprofit advocate Green America, “Unless we move quickly to reduce and clean up our use of coal as an energy source, we will pass the tipping point beyond which the effects of global warming become irreversible.”

Here are five ways that wind is pulling ahead in the energy battle.

Cost. Price remains the key reason wind is beating out coal. Wind power is growing increasingly less expensive, which of course makes it attractive to any industry looking to cut operating costs. Utility executives say that wind energy is the least expensive energy source out of all possible choices. According to a recent article in the Durango Herald, “The most dramatic change has been seen in the plummeting cost of emissions-free wind energy, which has declined by two-thirds in the last six years thanks to the availability of cheaper, more efficient turbines.” With such turbines, the only noteworthy cost remains the development of the wind farm. From there, there is not a significant amount of maintenance required, making the long-term return of a wind turbine pretty impressive.

Efficiency. Wind power has a good reputation for being rather efficient. Most of the newer wind turbines produce electricity between 70% and 85% of the time. In a recent article, energy writer Michael Kanellos reported an experiment from Good Magazine which measured how much of each type of energy would be required to power a lightbulb for a whole year. While it would take a hefty 714 pounds of coal, it would take wind turbines only “2 hours, 20 minutes and 9 seconds from a 1.5 MW turbine at 25% capacity.” Just over two hours for a whole year’s worth of lightbulb light? As opposed to hundreds of pounds of coal? Seems like a no-brainer.

Environment. Coal produces greenhouse gases that are extremely harmful to the environment. Since the majority of U.S. coal plants do not control emissions, vast amounts of carbon dioxide, sulfur dioxide, mercury, and arsenic make their way into the atmosphere, harming animals, plants, and the Earth alike. As we know, carbon dioxide is the biggest cause of global warming. There are also a multitude of resources that must go into producing coal, the most alarming of which is water. In water-strained countries like India, often coal production must come to a halt when there is a shortage. On the other hand, the only harmful emissions caused by wind turbines occur in production and installation. However, the amount of clean energy produced by them far outweighs the emissions after a very short period of time.

Investment incentives. In the US, investors and entrepreneurs involved in wind energy can enjoy the Production Tax Credit and the Investment Tax Credit. Worth 2.3 cents for every kilowatt-hour of electricity generated, these types of incentives are meant to encourage our savviest businesspeople to stay involved in the renewable energy industry. In India, the government has pushed to offer low-interest financing for wind turbine farms.

Job creation. It is thought that wind turbine projects create 30% more jobs than coal plants. According to the U.S. Bureau of Labor Statistics, “wind turbine technician” is the country’s fastest-growing profession. What’s more, it doesn’t necessarily require a bachelor’s degree. With the profession’s 2014 median annual salary just under $50,000, it seems that the renewable energy field is offering lucrative professions that are alternatives to the increasingly expensive 4-year college route.

Wind turbine development projects also allow the more desolate, rural areas of the United States (and, around the world) to welcome new industry and create jobs. Most recently, MidAmerican Energy invested over $3 billion on wind turbines in Iowa, a state that already gets around a third of its energy from wind.