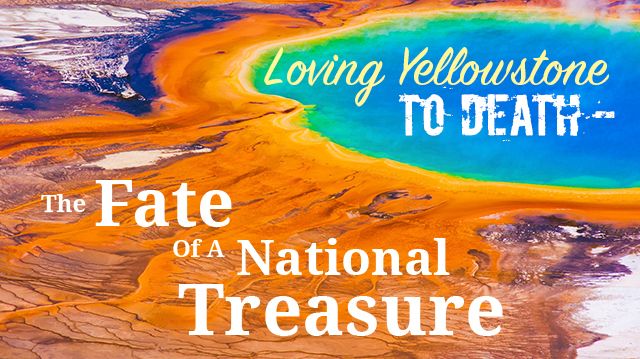 Throughout the country, national parks are increasingly vulnerable to environmental and cultural degradation. These issues aren’t new, and Yellowstone isn’t the only national park affected, but the situation is worsening each year. In that sense, Yellowstone is the “canary in the coal mine.”

For the past 144 years, Yellowstone has served as a sort of laboratory for maintaining wild lands and managing wildlife while allowing public access.

In 2015, at least 377 wild animals were killed by motor vehicles in the Jackson Hole area of Yellowstone alone. These numbers include bear, moose, elk and deer, according to National Geographic. Officials are contemplating construction of road crossings accessible to wildlife in heavily trafficked areas, including bridges over the roadways and tunnels underneath.

People come to Yellowstone to see wildlife, and once a bear or bison is sighted near a roadway, traffic comes to a halt as people take photos. Like much of the rest of the roadway infrastructure in the US, Yellowstone’s roads are not in great shape or designed for the amount of traffic they handle in the twenty-first century. Traffic backups are frequent and last for hours — not exactly a wilderness experience. National Geographic estimates that required maintenance for the park’s roads and structures is $663 million.

Hiking and horseback riding were once the primary recreational and transportation uses in Yellowstone. Today, mountain bikers, skiers, snowmobilers and boaters cause harm by scaring wildlife away from their native habitats.

Head to the backcountry

If you do want to commune with nature rather than fellow humans in Yellowstone, head to the backcountry. That’s not an option for everyone, but for true nature lovers, it is perhaps the only way to view the land relatively unscathed by man. While you will see evidence of Homo sapiens no matter how far into the backcountry you venture, the overwhelming majority of visitors do not go more than several hundred yards from roadways. That’s true even in summer peak season.

Yellowstone’s boundaries were not created with ecology in mind. The US government must do more to protect those boundaries from logging, oil drilling and other business interests taking place immediately adjacent to the park, as vast as it is. This also holds true for private housing development. More and more people are choosing to build homes or “ranchettes” — properties of 40 acres or less — in the lands surrounding Yellowstone. National Geographic reports that by 2013, 30 percent of the Greater Yellowstone Ecosystem was developed, and those no-longer-open lands affect wildlife migration. Within the next four years, an estimated 40 percent of surrounding open range and farmlands will suffer from encroaching development. It’s one of the fastest-growing regions in rural America.

Yellowstone, along with nearby Grand Teton National Park and Glacier National Park, includes populations of the major North American predators — wolves, mountain lions and grizzly bears. These are the only such parks in the United States to do so. Currently, the wild lands surrounding the bulk of these parks’ boundaries provide habitat for these predator species’ primary prey, including deer and elk. As development expands, it cuts off the corridor routes for these animals. Needless to say, people and large predators don’t mix well. No one wants a grizzly in their backyard, even if the species has been there since time immemorial.

Time is running out to save the private lands surrounding Yellowstone. Many major land conservancies are working with private owners to purchase properties or establish conservation easements. The best outcome is national legislation, but whether that can be accomplished in these politically perilous times is uncertain, at best.