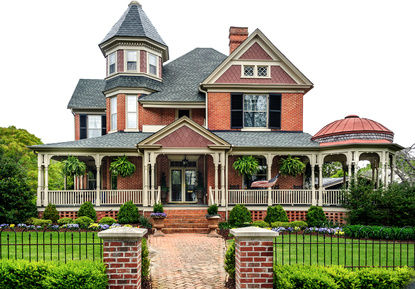 OId homes often have lots of character and charm, but unfortunately, they can also be hazardous to your health. If you’re thinking about buying that beautiful Victorian with the gingerbread trim or perhaps an antebellum Greek revival, there are a lot of things to consider.

It doesn’t necessarily mean that you should give up on your dream, but you may need to have quite a bit more cash available to eliminate those hazards.

Radon is considered to be a cancer-causing natural radioactive gas that comes from underground, usually entering homes through cracks in the foundation. The Surgeon General of the United States has warned that it’s the second leading cause of lung cancer in our country today.

If you smoke and live in a home with a high radon level, your risk of developing lung cancer is especially high. The EPA says that it kills an estimated 20,000 people in the U.S each year.

Radon naturally dissipates in the atmosphere, and every home that sits on or in the ground has it, but some homes are said to trap it too well. The EPA estimates that one in 15 U.S. homes has a high level of radon, and testing is the only way to find out a home’s radon levels.

If the home you’re thinking about buying has a high radon level, it can be fixed, sometimes as easily as sealing the basement floor and installing ventilation. But it can also be quite costly, such as having to put in a new foundation and plumbing.

Nearly all homes built before 1940 contain lead, according to the U.S. Department of Housing and Urban Development. In its solid form, interior and exterior lead paint is not considered harmful as long as it isn’t ingested, such as a toddler chewing on a window sill. In most cases, interior paint has been painted over many times and is well encapsulated in a Latex-based paint.

Problems can occur when paint on exterior siding peels or flakes off as the particles can become airborne or drop into soil where they can be ingested by children or pets. They could potentially contaminate a vegetable garden as well. It’s generally recommended that exterior siding be completely removed, rather than attempt to strip off layers of paint that might contain lead.

Molds are a natural part of our environment, and damp indoor areas such as the floor, walls and carpets, provide an ideal place for the spores to settle and begin to grow. While they’re invisible to the naked eye, they float through outdoor and indoor air.

While any home can potentially have mold, particularly in moist climates, older homes may be more prone to this issue as they may not be as well sealed (mold tends to grow in areas where condensation occurs, and that is typically near leaky areas of the house).

Mold can cause health problems, including allergic reactions in those who are sensitive, which is fairly common. Symptoms may include sneezing, runny nose, red eyes and skin rash.

If you suspect mold, it’s important to first get rid of the water source that is causing it, such as leaks and condensation. The mold will have to be removed on the surface which can be done with hydrogen peroxide, but if it’s settled deep into the house it may need to be professionally removed.

The health threat from asbestos is primarily from its tiny fibers that are released into the air and get into the lungs. It can cause people to develop lung cancer or asbestosis, which is a serious scarring of lung tissues.

It is only hazardous if it is “friable,” or loose and entering the air where you can breathe it in. If the material isn’t worn out, frayed or loose and crumbling, it won’t cause a problem. You may need to have an inspector come in to conduct a risk assessment.

Interior repairs are often in the range of $500 to $1,000, however, the exact cost depends on the extent of work required – for example, very old furnaces may be lined with asbestos in which case the cost of cleanup and replacement can be in the $10,000 to $20,000 range.

When weighing the pros and the cons of buying your dream house, just be sure to include the costs of potential repairs to get it into tip-top shape so that it doesn’t become a health nightmare.