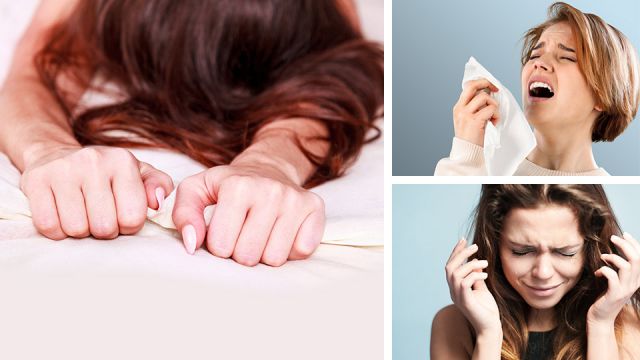 There’s no rule or scientific norm for how, when, how long and how often people orgasm for, so you may be surprised at how different other people’s orgasms actually are to yours.

“My first time [orgasming]… resulted in some of the most beautiful mandala-like patterns of bright colors to writhe throughout my body. It felt upon reaching climax that I had shrunken into a tiny atom where color and pattern were the only things to exist,” wrote Rhiannon Walsh, for Cosmopolitan. Walsh has synaesthesia, a neurological condition where people experience sensations like tasting sound or hearing color.

In Walsh’s case, she said she saw greater fireworks and “sparkling hues” the closer she was to the person she was having sex with. And when she went at it alone, she was lucky to see watered-down blues and greens.

A German study found that people with synaesthesia were also more likely to go into a trance during sex, while other synaesthetes say the intensity of the colors they see increases with the state of arousal. One person described seeing fog transformed into a wall, which burst into “ringlike structures… in bluish-violet tones” when they orgasmed.

3. Not being able to hear

Some people lose their hearing for two to ten minutes after an orgasm, often accompanied by some ringing in their ears. There have been no studies on this, but one doctor hypothesized that the sudden decrease in heart rate and blood pressure can cause sudden pressure changes in the middle ear and reduce blood flow to the inner ear. Also, during sex and orgasm, some parts of the brain are switched on, and others switched off — including the temporal lobe, which covers hearing and sensory association. Finally, he argued that a release of chemical endorphins could also affect the neurotransmitters in the brain, causing a change in auditory perception.

4. Hallucinations and a sensation of flying

Many women in a small survey from Turkey reported they felt a sensation of flying, or a feeling of leaving their bodies. Twenty-four percent of those studied also said they felt a sense of entering a cartoon world when they orgasmed. One man, who was in a very relaxed state to start off with, said that he saw the woman touching him as a “purple/blue energy being and energy circulating between both of our bodies.”

You may have heard the rumors that sneezing is a tenth of an orgasm (it’s apparently not true), but it’s less likely you’ve heard about people who sneeze after orgasming.

Doctors aren’t totally sure why this happens, but they suspect such people have a faulty connection in their autonomic nervous system (where heart rate, digestion and pupil dilation are controlled). One man alerted these doctors that he even got uncontrollable fits of sneezing just thinking about sex.

But the situation isn’t that uncommon; a large Swedish study found that 25 percent of people sneeze in response to bright light, and it seems the phenomena is genetically inherited.

Crying after orgasm is a fair bit more common than the above situations. Others feel sad, or become a bit depressed or anxious. Where such reactions aren’t directly related to the person’s state of mind, it can be that the rush of oxytocin from the orgasm causes a few happy tears. On the other hand, many people have postcoital dysphoria (PCD), which is more common in women.

An Australian study of female university students found that 46 percent of them had PCD at some point. The authors of that study asserted that people with more fragile self-esteem were more likely to get PCD, but that it also probably has a genetic component to it.

Sex therapist Denise Knowles stressed that PCD doesn’t have to mean that you’re going through something sinister, traumatic or regretful. Rather, she said that orgasm brings on a lot of “feel-good bonding hormones” like endorphins, oxytocin and prolactin. And when these hormones drop after the peak, a sense of sadness can follow.

A not-so-happy side effect, scientists don’t totally understand why some people have epileptic attacks and seizures immediately after orgasm. Don’t worry though, it doesn’t seem to be very common. Known as orgasmolespsy, this condition is often reported in people with other sleep-wake disorders. One male who had it reported that it only happened to him while in a relationship involving a lot of emotional commitment and trust.

Have you had any interesting effects during orgasm, or do you know other people who have?