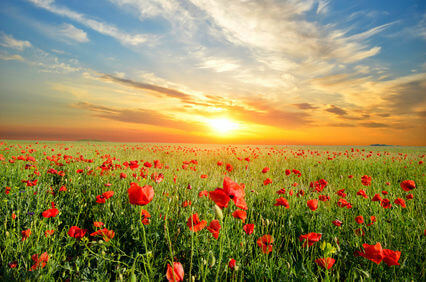 Not to be confused with its more addictive cousin, papaver somniferum, common poppy or papaver rhoeas is also known as “corn poppy,” or “red poppy.” The plant is actually a weed most commonly found in England and Scotland.

It can be seen growing along roadsides and in cornfields. Yet unlike most pesky weeds, this plant is something to behold with bright red flowers that begin to bloom in mid-June and continue through October.

A single plant can produce anywhere between one and 400 flowers depending on the favorability of conditions. These brilliant red leaves have been immortalized by the poet John McCrae in his 1915 poem In Flanders Field and are often a symbol of veteran appreciation around the globe.

Aside from their vibrant red petals, the common poppy has a history of calming coughs and helping to induce sleep. Studies have shown that extracts of common poppy have a mild sedative effect, which is probably why poppy was used to quell pain and nervous conditions in the past. And the bright red petals are more than just eye-catching.

They contain the alkaloid rhoeadine which is responsible for the calming effect, yet safer than that of the addictive sort in opium. Today, teas made from the petals are often prescribed as a natural means to aid in sleeplessness and red syrups are also a product of these vibrant petals which are used as a food coloring in soups and sauces.

Almost the entire plant is edible. The seeds of the poppy offer a slightly nutty flavor and can be used in various baked goods. They can also be pressed for their oil to use as an alternative to common olive oil, while the leaves can be cooked like spinach or other greens or added raw to soups, stews and other dishes for flavoring.

Aside from the plant’s traditional calming effects, research has shown the roots of common poppy to have an anti-ulcer effect nearly as powerful as that of certain medications. And further studies have linked the high concentrations of antioxidants in the common poppy to overall better health of those who consume it regularly.