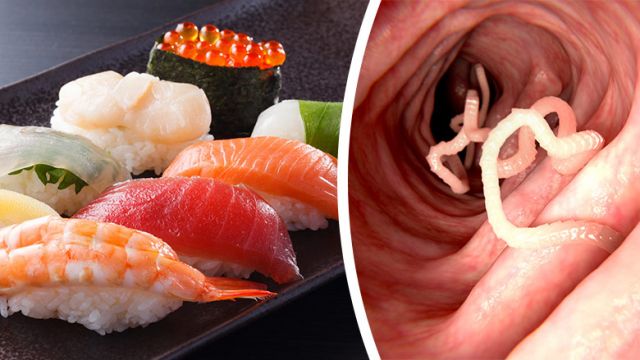 There are few things more delicious than freshly prepared sushi with tasty ingredients. However, one California man had a crazy experience with the Japanese cuisine. After eating salmon sushi every day, he found out that a whopping five-foot tapeworm was living inside his body.

Doctor Kenny Banh spoke about the Fresno man’s crazy experience on a medical podcast called “This Won’t Hurt A Bit.” Banh said that a young man came to the hospital complaining about bloody diarrhea and wanted to be tested for worms.

Here is a picture of the tapeworm:

WARNING: GRAPHIC CONTENT. A Fresno man with a ravenous appetite for sushi showed up at CRMC asking to be treated for worms. When ER doctors asked why, he said he pulled out a 5 1/2 foot long tapeworm from his body. We speak with the physician who treated him tonight @ABC30 pic.twitter.com/RMtC3grhlW

Dr. Banh asked the patient what happened and the man explained that he had very bad cramps and bloody diarrhea. “I looked down and it looked like there was a piece of intestine hanging out of me,” Banh remembered him saying.

The patient thought that he was dying, confusing the worm with his own intestines. He then saw the worm wiggling out of his body, but was relieved to know that it was a worm and not his own insides.

According to doctors, the tapeworm was linked to the patient’s consumption of raw salmon in the sushi he was eating. “He says, ‘I eat raw salmon almost every day,’” Bahn told The Fresno Bee. Still, Bahn’s patient quipped that he will still be eating sushi, just not the kind with salmon or other raw meat.

In 2017, the CDC warned that Japanese broad tapeworm larvae have been found in many Pacific-caught salmon. Apparently, tapeworms appear in many types of fish that are not flash frozen. In fact, the most common kind of fish tapeworm is Diphyllobothrium latum and it can grow up to an astonishing 30 feet!

Most often, tapeworms lead to only minor symptoms, but in serious cases they can turn into a major medical problem like this particular case, according to Roman Kuchta, lead author of the study and a research scientist at the Academy of Sciences of the Czech Republic.

Raw meat can still be eaten raw, just in a safe way. In fact, one major disadvantage of cooking meats is that they can lose some nutritional value in the process. Some minerals in meat are heat-stable and fat-soluble, like vitamins like A, D, E and K. But water-soluble vitamins like B and C are more fragile and cooking can result in losing them.

Instead of raw salmon, eat this

Some healthy raw meats to eat include ground beef, steaks and some types of shellfish, like oysters. In fact, raw beef is very high in vitamin B and many claim that it’s beneficial for hormonal and reproductive health.

Here is a dish of some delicious looking raw oysters (which are packed with nutrients):

Oysters at @labrasaboston! Loved hosting a small dinner party there last week with @dineoutwith.us, a cool new service that sets up group dinner parties at restaurants in the Boston Area. And good news — @dineoutwith.us is giving away a dinner party at La Brasa for a group of six. Check this link [http://bit.ly/LaBrasaXDineOut] to enter! #BostonFoodies #DineOutWithUs

Even if you do have an intestinal worm, there are some great natural remedies out there. For example, coconut is amazing at expelling all types of internal worms. Garlic is another great anti-parasitic food that can kill off intestinal worms. Pumpkin seeds are another option, as they have a compound called cucurbitacin that can paralyze parasites.