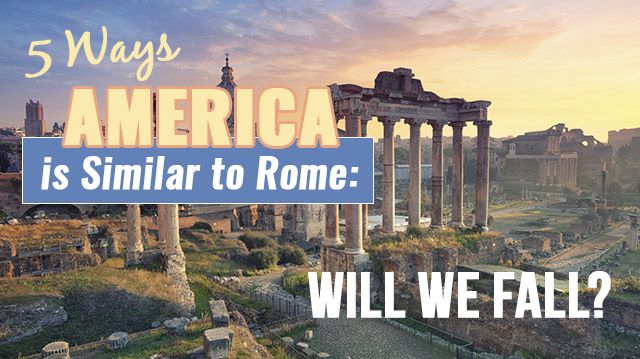 It’s hard not to compare modern America with Ancient Rome — there are numerous similarities. Just like America, the Roman Empire was extremely powerful economically, politically, culturally and militarily. But just like Ancient Rome, is America destined to fall?

Let’s begin with an issue that remains at the “financial” heart of today’s US election — funding. Back in 2012, the election reportedly cost $3 billion. Similar to Ancient Roman elections, the money came from private sources, making leaders obliged to special interest groups.

Today, the key candidates are well on their way to achieving the same financial goals. Donald Trump’s campaign reportedly raised $5.8 million, with $1.8 million coming from his own pocket, and he has spent $5.6 million. Vermont Senator Bernie Sanders has brought in $41.5 million, and spent $14.3 million. It must be noted, Sanders is well known for his ideas on giving back to the little guy, and his refusal to take Super PAC and other PAC money. Hillary Clinton has reportedly raised $77.5 million, and has spent $44.5 million.

During the late Roman Republic, elections also became exceedingly expensive. Apparently, Caesar borrowed so much for one political campaign that he feared if he was not elected, he would be ruined.

Rome was a formidable powerhouse. Today, the US is also considered a superpower that dominates the world’s economic and political systems. The US not only has a military advantage over other countries, but also an advantage in commerce, technology and culture.

Here’s the problem: From a non-American’s perspective, just like the Romans, Americans have become smug and tend to overexaggerate their self-importance in the world. Some argue that other countries such as China are quickly growing to become the next superpower. If the Romans could not sustain their power, what makes the US think it will?

Rome ran short of people to sustain its military, and now America has found recruits through outside sources. But this may not be a good long-term solution.

When you’re on top, there’s only one way to go — down.

How do Americans view the outside world? Similarly to the way Romans viewed outsiders. Rome often criticized the people beyond its borders, and generally underestimated their capabilities. While America is far more complicated than Rome, its attitude, although more idealistic and well meaning, is strikingly similar.

The study of Ancient Rome’s frontiers show that the Roman Empire was similar to the US — borders with continual interaction, somewhat worrying at times, but normally peaceful and mutually beneficial. You can’t help but compare the zones surrounding the powerful Roman civilization to those between the US and Mexico, or even Canada.

There are many cultural similarities between Ancient Rome and America today. When it comes to laws, lawyers and lawsuits, just like the Ancient Romans, Americans can’t seem to get enough. In addition, Americans love to humiliate public figures through comedy and satire — just turn on late-night TV.

While there are obvious similarities between modern-day America and Ancient Rome, there remain some differences, such as technological advancement, the abolishment of slavery, social classes (Rome had no middle class), and of course, democracy, which sets the two cultures apart.

But ask any conspiracy theorist and they will tell you that America is doomed to fall — perhaps a self-fulfilling prophecy. However, I’d like to believe that knowledge is power. And just like the forefathers who studied Rome to lay the groundwork for modern-day America — the future is in our hands.