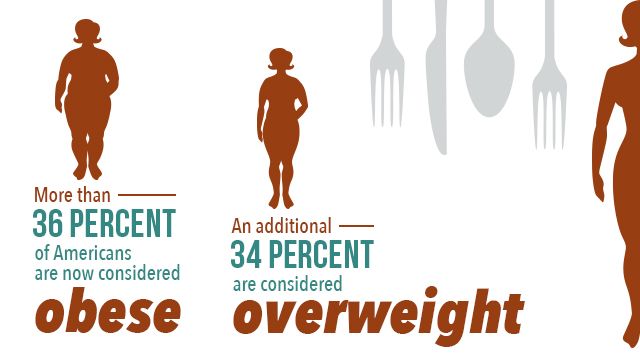 Nothing in life is certain, but if you take an active role, you can most certainly impact your future by influencing your overall health. Obesity plays a role in a wide range of conditions, especially in terms of cardiovascular disease, but did you know it’s also strongly linked to cancer?

We often associate cancer with risk factors such as genetics and smoking, but our weight and diet are potentially the most problematic of them all. Shockingly, approximately 41 percent of uterine cancers have been tied to obesity, as well as an additional 10 percent of all kidney, liver, colon and gallbladder cases.

The West is facing an epidemic — we’re overfed and underactive

According to the World Health Organization, obesity has more than doubled since 1980. In 2014, approximately 39 percent of the worldwide adult population was overweight and 13 percent were considered to be obese. What’s going on here? What’s causing our health to deteriorate?

It’s disconcerting, especially since obesity is preventable. Although the human body is complex, the fundamental cause of excess weight is due to a calorie imbalance. Essentially, more calories are being consumed than the number of calories being expended. If we know that obesity is contributing to illness and mortality, why is it that rates continue to rise?

Worldwide, there has been a dramatic shift in our current food systems along with our overall lifestyles. High-fat and high-sugar foods dominate the standard diet, while sedentary lifestyles and inactivity also play a critical role. It’s a vicious cycle, and while obesity has been linked to heart attacks and stroke, it’s clear that cancer development is also a major concern.

Throughout the literature, there is a clear connection between a high BMI and the development of cancer. A study published in The Lancet reported that approximately 3.6 percent of new cancer cases in adults (30 years and older) in 2012 were attributed to high BMI — more specifically, 63.6 percent of cases attributed to high BMI were based on the development of corpus uteri, colon and postmenopausal breast cancers.

This is unsettling, as current trends and patterns of obesity will likely lead to an increased future burden of cancer cases. Although rates are even higher in terms of specific types of cancer, the American Cancer Society estimates that excess body weight accounts for as many as one out of five cancer-related deaths.

The greatest link has been made between high BMI and the following cancers: breast, colon, endometrium, kidney, pancreas and esophagus. It’s believed that carrying around excess weight may affect the body’s natural immune system; increase overall inflammation; influence hormonal levels, including estrogen and insulin; and affect the regulation of cell growth.

When you’re obese or overweight, you’re essentially in a toxic state — inflammation increases, as well as insulin resistance. For women, there also tends to be an increased bioavailability of free estrogens, which is known to be a cancer-causing agent under certain conditions. It’s critical that you are proactive, making changes today, before complications develop in the future.

Fitbit is teaming up with the Dana-Farber Cancer Institute

Fitbit has taken the world by storm, offering valuable information for those who wish to track anything from the number of steps they take to the hours they sleep. Now this wearable technology will play a role in cancer research. A 3,200-person study is set to launch, focusing on breast-cancer recurrence.

The goal of this study is to determine whether or not breast-cancer recurrence is affected by weight loss in both overweight and obese patients. The goal is to determine why, biologically, this connection occurs. Set to begin this August, the six-year study will offer data in two years’ time.

If you’re overweight or obese, there’s no better time to take control of your life than right now. We sometimes view cancer as something that’s out of our control, but it’s clear that this could not be further from the truth. You are in control. Invest in that cute workout outfit you’ve been eyeing and clear out your junk-food cupboard — it’s time to shed that dangerous excess weight. You can do it!