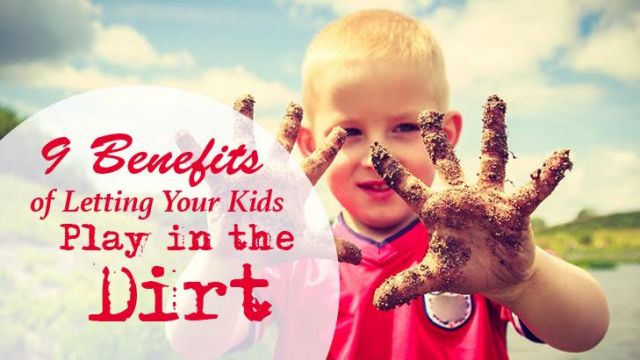 All parents know that when given the choice, the great majority of kids love to run through mud puddles, dig in the sandbox, roll in the grass, and get as dirty as possible!

Many parents understandably cringe when they see their child plunging into the dirt — it means a whole lot of cleanup, which is just not fun. However, allowing kids to let loose and get dirty is actually very important to their development, and their health.

Here are 9 reasons to let your little one get dirty:

When kids are allowed to play in the dirt, they may sit and make mud cakes for a while, but they’ll likely also be running, jumping, crawling and cartwheeling through it. All of this exercise is highly important, and the cornerstone of a child’s development.

As a bonus, when kids are enjoying being physically active on their own terms, it also teaches them that exercise is fun: an important lesson that will benefit their entire lives.

Playing in the dirt — and even eating a bit of it — can help train and strengthen young immune systems. As microbiology and immunology educator Mary Ruebush explains:

“What a child is doing when he puts things in his mouth is allowing his immune response to explore his environment. Not only does this allow for ‘practice’ of immune responses, which will be necessary for protection, but it also plays a critical role in teaching the immature immune response what is best ignored.”

So, exposing your child to dirt early on may actually help their immune systems to battle invading organisms as they grow.

It may lessen the chance of developing allergies

Along with helping to strengthen the immune system, playing in the dirt may lessen a child’s chance of developing allergies. This is because gradual exposure to allergens in your area can allow the body to become accustomed to them.

As we reported previously, it has been found that children raised on farms suffer from less instances of allergies and autoimmune conditions than children not raised on farms. A big part of this is dirt exposure.

Grounding, also known as “earthing,” is simply having our feet and bodies in contact with the earth. As we explored in a previous article, doing this on a regular basis may lead to a reduced risk of many chronic conditions.

To let your kids get some good grounding into their days, let them run through the dirt barefoot when the weather permits. It doesn’t take long to wash off their little feet!

They need the vitamin D

Playing in the dirt often means more time in the sun — and kids need that vitamin D to protect the health of their bones and immune systems. Sun safety measures are important, but not enough time in the sun isn’t healthy and could lead to negative effects.

A close relationship with nature

When children play in the dirt, they learn a lot about nature. They learn about the plants that grow in the soil, and about the creatures that live in it. For young children, the textures of soil, mud, sand and grass are extremely stimulating, and they learn a great deal about their environment from engaging with it.

It may boost their brains

A body of research has found a link between time spent in the outdoor environment and increases in kids’ cognitive skills. For one example, a 2004 study published in the journal Environmental Education Research found that an environmental education course positively affected the critical thinking skills of high school students.

When children are allowed free, unstructured playtime in the great outdoors, it may greatly help to relieve stress and anxiety, according to the National Wildlife Federation. Since stressors abound for kids between schoolwork, social issues and all of the other struggles that accompany growing up, some stress-relieving playtime is crucial.

We could learn a lot from our kids and do it more often ourselves. Some quality family time jumping in mud puddles, gardening, playing soccer or playing tag in the soil or grass could be extremely beneficial to everyone involved. It’s worth the dirt and mess!