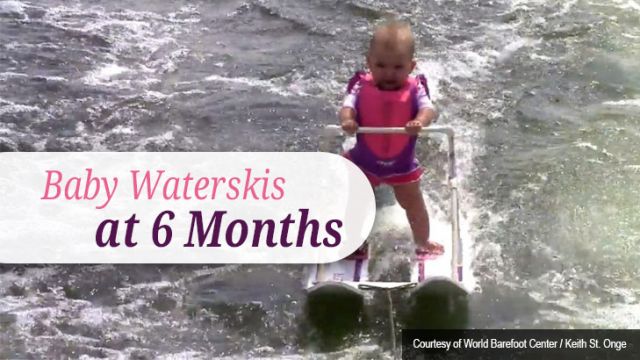 A six-month-old baby, barely able to walk, is now the youngest water-skier in the world. At six months and 27 days, Zyla St. Onge has broken the World Barefoot Center record previously held by Parks Bonifay, who took to his first set of skis at six months and 29 days.

The baby is 30 inches long and weighs only 20 pounds. She skied 696 feet across Lake Silver in Florida. Her father thinks she could have skied longer if they hadn’t come to the end of the lake.

Parks Bonifay grew up to become a professional wakeboarder, and Zyla St. Onge may be headed for similar feats. Parental success on the water seems to be key for developing skills at a young age. Bonifay’s father was the first to water-ski on his hands, among other tricks.

Zyla’s father, Keith St. Onge, is a professional water-skier. He competed in his first world championship at 18 years old. He has since broken numerous records and won a slew of competitions. He is one of only four men to have ever won all three events at a world championship.

Zyla’s mom, Laurent St. Onge, has also been known to try on skis. According to her husband’s Twitter, she was still skiing while 36 weeks pregnant with little Zyla.

Keith St. Onge noted that Zyla learned to ski on a carpet before taking to water: “We practiced in our living room with the skis and we kind of pulled her around,” the Huffington Post reports. “She would just look around and smile and wait for you to cheer for her. She just loves the attention.”

Not everyone shared the child’s joy. A YouTube commenter questioned the decision to put a baby on water skis. Some suggested that the stunt amounted to child abuse. According to the Associated Press, Zyla’s father defends their decision. “People don’t realize that it was done properly,” he said. “It was planned and she was ready for it.”

The baby’s water skis were linked together and stabilized for her safety. She also had adult spotters keeping a close eye on her as she skied across the lake. Her father was by her side in the water seconds after her skis started to sink. The boat pulling her traveled at only seven miles an hour.

I suppose this just goes to show that you can never please everyone on the Internet. As Zyla’s mom says, the baby certainly was pleased with herself.