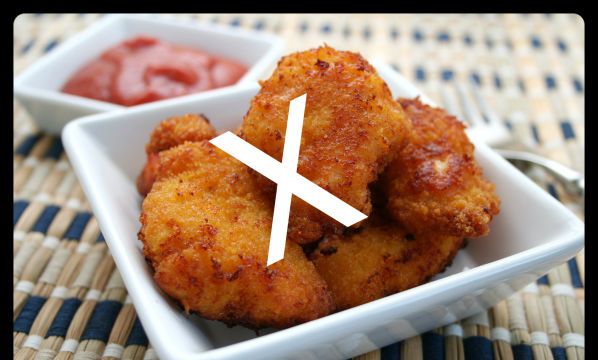 If you need yet another reason to skip the McDonald’s drive-thru, aside from the unhealthy additives, detrimental cooking oils, and general lack of nutritional value, you may consider the high potential for contamination in these highly-processed “food” items.

This past week, two McDonald’s visitors in Japan found much more than they expected in their Chicken McNuggets – a side of blue plastic.

After the first individual found plastic shards in their McNuggets, McDonald’s removed over one million nuggets from a Cargill factory in Thailand, where the nuggets were thought to have been manufactured. However, later that week, another Japanese customer found a chunk of vinyl in their McNuggets.

McDonald’s has issued an apology for the contamination, and stated that is it unsure whether the two incidents were connected. The source of the plastic, thought to have been introduced at the Cargill factory, is still unknown.

On the matter, a press release by Cargill states: “Cargill announced today, that after an exhaustive investigation, they are confident the blue, plastic foreign material recently reported in one McDonalds Chicken Nugget in Japan did not originate from Cargill’s production facilities.”

This may be even more worrying than if the plastic had been found at the facility, because investigators still have no idea where it came from, and therefore, it may still be making its way into McDonald’s food.

McDonald’s Japan has been sinking in popularity over the past year, as other disgusting situations have recently transpired. One, last July, involved the contamination of fresh chicken with expired food items. Last August, one McDonald’s patron in Japan found a piece of a human tooth in their french fries. YUCK.

While these incidents occurred in Japan, that does not mean you can breathe easy ordering McNuggets in the United States – when it comes to heavily processed food, contamination can happen anywhere. And its not just McDonald’s: other fast food facilities (and packaged food manufacturers) are not immune, either.

Avoiding this risk is as simple as can be: make your own meals at home! They’ll taste better, you’ll know what’s in them, and you won’t have to worry about biting down on vinyl. Really, it’s a no-brainer.