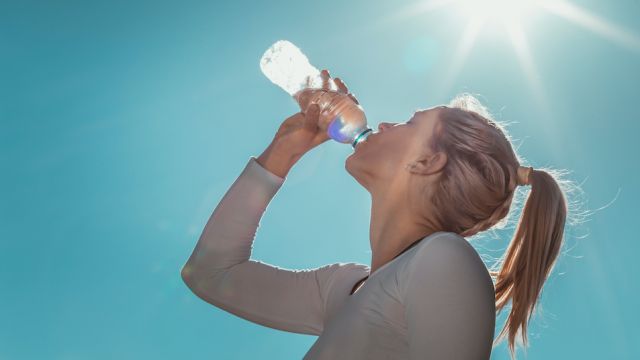 It is estimated that 75 percent of American adults suffer from self-imposed chronic dehydration, with most drinking an average of only 2.5 cups of water a day. Inadequate hydration can cause fatigue, poor appetite, heat intolerance, dizziness, constipation, kidney stones, and a dangerous drop in blood pressure. On the other hand, overhydration, also known as water intoxication or hyponatremia, can also be a major health issue, causing delirium, swelling, and headaches.

Now more than ever, we understand that maintaining a balanced level of hydration is crucial to your health. Your body may seem solid, but the majority of it is water, ranging from 75 percent of the bodyweight of infants to 55 percent of the elderly. Every cell and bodily process depends on water to function properly. Water transports nutrients, regulates body temperature, lubricates joints and internal organs, supports the structure of cells and tissues, and preserves cardiovascular function. We can survive for only three or four days without water. But why are so few of us achieving healthy hydration?

Why dehydration is dangerous for your health

Inadequate hydration can really affect your quality of life. If you don’t drink enough water, you may experience fatigue, constipation, kidney stones, and blood pressure issues. Brain effects include mood shifts, muddled thinking, inattentiveness, and poor memory. A loss of only 1 to 2 percent of body water can impair cognitive performance, according to studies at Virginia Polytechnic Institute and State University.

You don’t need to rely only on what you drink to meet your fluid needs. What you eat also provides a significant portion. For example, fruits and vegetables can be especially hydrating, ranging from cucumbers with 96.7 percent water to grapes with 81.5 percent water. If soups, fruits, veggies, and smoothies are a regular part of your diet, then you might not need to drink as much water.

How to tell if you’re drinking too much water

On the other hand, since drinking more water has become en vogue, many of us have adopted habits such as drinking a glass or two of water first thing in the morning, and carrying a bottle of water at all times. While experts recommend starting with a half-ounce of water per pound of body weight daily, some people have taken these recommendations too far.

Although uncommon, it’s possible to drink too much water. When your kidneys can’t excrete the excess water, the sodium content of your blood is diluted, which can be life-threatening. Overhydration can lead to low levels of electrolytes such as potassium, sodium, and magnesium, which helps regulate everything from your kidneys to your heart function. If you consume too much water, there may not be enough of these electrolytes in your body to keep it functioning properly. Symptoms of overhydration can include headaches, nausea, and muscle weakness. In rare cases, water intoxication can cause swelling in the brain and become fatal.

Keep an eye out for these signs that you’re drinking too much water.

If, after drinking a lot of water, you begin to experience confusion or deliriousness, you should seek immediate medical attention.

Could saltwater be the next thing to quench your thirst?

While some of us are drinking too much water, many people around the world have too little. According to the World Health Organization, 785 million people worldwide lack a clean source of drinking water within half an hour’s walk of where they live. As the climate crisis takes hold, that problem is getting worse.

With saline water making up around 97 percent of the water on the planet, that’s a vast untapped resource for life-giving drinking water. Of course, this is only if scientific innovations can be utilized to make it safe for human use.

Many approaches are being tested, such as ultraviolet light, graphene filters, sunshine, and hydrogels. One recent advancement developed by scientists in Australia could be the most promising one yet, with researchers using metal-organic framework compounds (or MOFs) together with sunlight to purify water in just half an hour, using a process that’s more efficient than existing techniques.

This method is cheap and reusable, and it produces nearly 37 gallons of clean water from just 2.2 pounds of material. After just four minutes of exposure to sunlight – a free and abundant source of energy – the material releases all of the salt ions it’s soaked up from the water, and it is ready to be used again. This is much more sustainable, economical, and efficient than existing desalination methods and could potentially be fitted to pipes and other water systems to produce clean drinking water.

While most of us in the western world are lucky enough to have ready access to clean drinking water, we should take care not to take this precious resource for granted. Whether you’re currently in the habit of drinking too little or too much water, take steps to optimize your hydration, and your body will reward you with vibrant health for years to come.