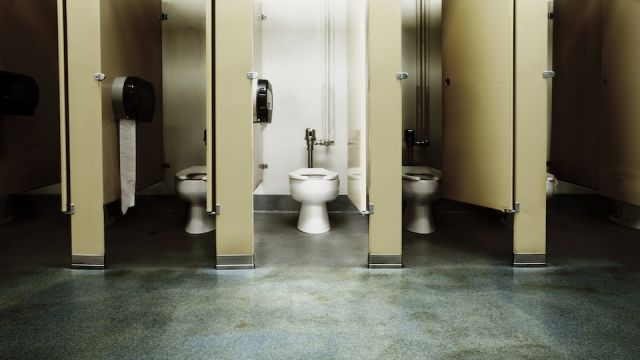 Are you not always spot on with washing your hands after you use a public restroom but somehow religious about putting down that thin layer of paper between your bottom and the toilet seat? While you should certainly wash your hands thoroughly after using a public restroom, the whole paper thing…Well, it looks like it is quite overrated, and there are more important things to be concerned with!

Although you may take a certain about of comfort in placing the very delicate paper seat cover just where it needs to go before sitting on a public toilet, the truth is rather dirty.  Turns out, using the paper exposes you to more bacteria than just sitting on the seat itself.

According to public health researcher Kelly Reyonlds, toilet seat covers are highly absorbent, and stubborn bacteria and viruses are teeny tiny and able to travel through the holes in the cover’s paper. She further adds that you are unlikely to come into any bacteria that will cause issues on a bare toilet seat anyways. So, it seems like covering may be a waste of time and paper. A comfort, maybe, but really a false sense of security.

So, while you don’t need to worry too much about the toilet seat, you should be concerned about something else. After you flush, bits of fecal matter fly in the air aerosol form. This phenomenon is known as “toilet plume.” According to Reynold, “bits of fecal matter settle on surfaces, contaminate hands and then get spread to the eyes, nose or mouth.”  This is the number one reason why you should always close the lid ( if there is one) before flushing.

Down, down, down, come bits of fecal matter and bacteria and land on the seat and other surfaces including the toilet paper (because of its close proximity to the toilet. Toilet paper is rough and highly absorbent. This creates the perfect conditions for bacteria within the “toilet plume.”

This is bad news for those of you who opt to wrap the seat in toilet paper before sitting down in lieu of the paper seat cover. You are basically making yourself a bacteria infused seat cover when you do this. Better to skip any paperwork all together and sit down on the seat directly. Yes, this is even better than hovering, which has its own issues. Hovering can create dirty conditions due to splatter. This is where seat covers come in handy – if you hover, be sure to cover too!

Always, always wash your hands and skip the jet dryers

The most significant risk found in public restrooms is the spread of fecal matter to the mouth. This all starts with your hands and is an important reminder about why it is critical to wash them well. Lather with soap and scrub for at least 20 seconds before rinsing.

Most restrooms have them — those fast and furious jet hand dryers. But are they actually more sterile than paper towels? Well, according to research, they could make you and others around you sick.

A study published in the Journal of Applied Microbiology compared three hand-drying methods: paper towels, a warm air dryer, and a jet air dryer. Researchers tested them for their potential to scatter viruses and contaminate the immediate environment with each use.

In turns out, jet air dryers were significantly the worst offenders. They sprayed 1,300 times more viral plaque than paper towels — sending it nearly 10 feet in circumference from the dryer.

Study researchers suggest different types of hand-drying devices should be carefully considered, particularly in areas where infection prevention is paramount, such as hospitals, health care settings, and the food industry.

If you have an option, go for the paper towel after washing!