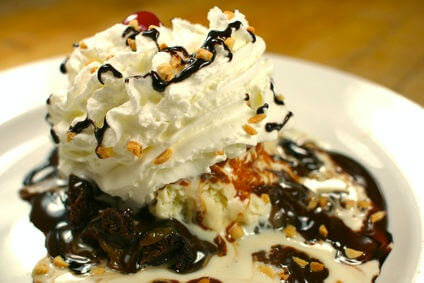 How many times do you find yourself working at a computer or watching television when all of a sudden an ad comes across the screen for a juicy cheeseburger or a decadent ice cream sundae with warm hot fudge running down the sides of the smooth, cold, semi-melted vanilla ice cream? All of a sudden you realize just how hungry you are and the only food that can curb the appetite just happens to be what was floating across your screen not 5 minutes earlier. It’s not just a good marketing technique; it’s a scientific fact that pictures of food can influence hunger. In fact, a recent study tested the response of ghrelin, the neuropeptide that signals hunger, of subjects who were either shown photos of food or non-food-related items. When subjects were shown photos of food, ghrelin levels increased significantly as compared to when the photos were non-food-related. So it’s only normal to get that hunger pang when you see an ad for a sugary snack or cheesy pizza slice.

However, recent research suggests that repeated exposure to food photography can actually decrease your enjoyment of the real thing. This “sensory boredom” can essentially overwhelm your brain enough to satisfy a craving for a particular food. Scientists split 230 research subjects into two groups; half were shown 60 pictures of sweet foods like cakes and chocolate while the other half were asked to look at 60 pictures of savory foods like chips and pretzels.

This explains why those who viewed sweets enjoyed the salted peanuts more than their fellow subjects. The science of how we perceive food is quite complex though. When scientists asked subjects to rate the saltiness of cheese, those who were served the samples via a knife found it more salty than when the same piece was served from a fork or toothpick. Similarly, subjects rated hot chocolate tastier when it was served in an orange mug as opposed to a white mug.

And another study found that participants ate smaller serving sizes when shown a photo of their previous meal just prior to eating again, suggesting that the recalled memory of the last meal is enough to reduce hunger. So the next time you feel the urge to snack, you may want to try one of these tactics. Snap a quick photo of your meals to keep on hand. Or, if you just can’t be satiated, perhaps try a different color plate or utensil.

And if all else fails, go outside for a quick walk. You’ll forget about your cravings and burn a few calories too!