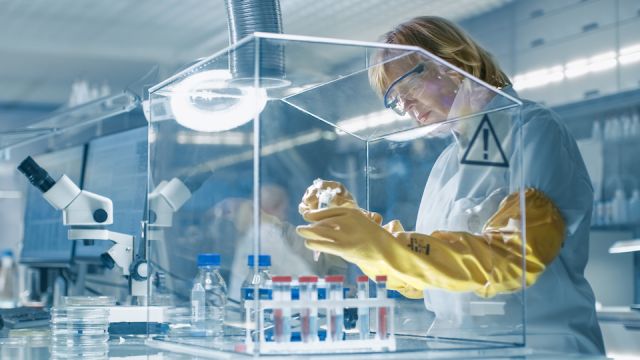 You can’t see them, they are invisible, but they can be deadly. I am referring to perfluoroalky and polyfluoroalkyl substances (PFAS) also known as “forever chemicals” because they take an extremely long time to break down. These toxins are used to repel grease and water in food packages containing fatty and moist items such as burgers and cakes.

PFAS substances have been linked to cancer, increased cholesterol, and infertility. Research shows that they can alter metabolism, increase the risk of obesity, and reduce the ability of the body to fight off infections. There is also research showing a link between PFAS and women with Type 2 diabetes.

The Centers for Disease Control and Prevention’s National Health and Nutrition Examination Survey (NHANES) found PFAS in the blood of 98% of Americans. But how did they get there and why aren’t there stricter regulations in place to stop this?

There is one country who isn’t waiting any longer to take action. Convinced of their danger, Demark leads the way to protect its citizens from these health hazards. Let’s hope our government is paying attention.

Denmark has become the forerunner in banning these highly dangerous chemicals from food packaging. The New law will begin next year and will require baking paper and bags for such things as microwave popcorn to be free of PFAS.

The ban includes the use of PFAS compounds in materials that come in contact with food such as cardboard and paper. It may be permissible to continue to use recycled paper for food packages, but PFAS compounds must be separated from food by a barrier, which will keep the chemicals out of the food.

“I do not want to accept the risk of harmful fluorinated substances (PFAS) migrating from the packaging and into our food. These substances represent such a health problem that we can no longer wait for the EU,”

What exactly are PFAS?

PFAS chemicals are a family of thousands of synthetic chemicals that are as long living in the human body as they are in the environment. This is due to the super-strong bonds of fluorine and carbon. Almost 5,000 of these toxic chemicals exist and are increasing in number as the industry learns how to invent new forms of this type of chemical.

PFAS substances are not new, they have been in production since the 1940s and are commonly found in Teflon nonstick products, paints, cleaning products, food packaging, stain, and water repellents as well as fire fighting foams.

Not only can you be exposed to these dangerous chemicals through food packaging, but the chemicals also travel in the air, dust, food, soil, and water, contaminating vegetables, fruits, and grain.

The two most studied PFAS chemicals

The two most studied PFAS chemicals, PFOS and PFOA have been singled out as contaminants of strong concern by the US Environmental Protection Agency.

3M, the primary manufacturer for PFOS, voluntarily phased it out of production in 2000. IN 2006, PFOA was on its way to being phased out as well. While these chemicals are no longer made in the United States, similar – replacement chemicals such as GenX, may be just as dangerous and persistent according to Susan M. Pinney, a professor in the Department of Environmental Health at the University of Cincinnati.

A study presented early this summer by the Food and Drug Administration at a scientific conference in Helsinki, found PFAS linked to cancer in milk, meat, and produce and even store-made chocolate cake sold in the United States.

This suspicious study has not yet been released to the public but will soon be out in the open after contents were leaked to some well-known U.S media outlets by environmental groups. The FDA has confirmed the contents of the leaked report to be correct.

Tom Neltner, chemicals policy director with the Environmental Defense Fund, had this to say,

“I’m not sure why they released it there and not in the U.S., but I’m just glad it’s out,”

Chemicals in question are very dangerous

The chemicals referred to in the report are used in several everyday products, including food packages. Some states have banned packaging made with these chemicals after discovering researching showing that chemicals can be transferred to food.

According to FDA research, water contaminated with PFAS most likely ends up in the food supply. Fourteen of the 91 samples that were taken by the agency contained chemicals, and almost half of all meat and seafood samples tested were also positive.

PFAS has been found in water supplies near military bases and airports that use fire fighting foam as well as factories that manufacture products with PFAS.

Contamination of water and food found

The study also examined how chemicals were spreading to food. Produce that was for sale at a farmer’s market 10 miles from a PFAS production plant was contaminated with chemicals. A dairy farm near an Air Force base in New Mexico had contaminated water, which in turn, contaminated cows and the milk that they produce. The study noted that it would take 1.5 years to eliminate the chemicals from the cow after a 30-day exposure.

Although the study noted that food sources that tested positive were “not likely to be a safety concern,” Neltner says this is far too narrow. Exposure to such toxins is cumulative – the safety concern goes way up when there is more than a one-time exposure.

Neltner says that the study was rather skewed towards environmental concerns and did not pay enough attention to the staggering amounts of PFAS found in store-bought chocolate cake, which was 250 times the level the EPA recommends for water.

Between 2003 and 2016, the FDA approved 19 PFAS for the use in packaging food. Almost half of the fast-food wrappers collected in 2014 and 2015 were contaminated with PFAS. However, none of these allowable PFAS were tested in this most recent study.

The Environmental Protection Agency has concluded that the most significant source of human exposure to PFAS is diet. They note that livestock accumulate these chemicals from eating contaminated feed or grazing in fields where biosolids are applied. In addition, the majority of fish tested from hundreds of sites around the U.S. were also contaminated.

Using PFAS-contaminated sewage sludge as fertilizer on farm fields is just another way that chemicals can make their way into crops grown for both animal feed and human food. Approximately half of the seven million tons of sewage sludge made in the U.S each year is used on land – including farm fields. Samples taken of municipal sewage around the country found half to be tainted with PFAS. There are currently no federal regulations in place to require testing for PFAS, or prohibiting the use of contaminated sludge on farmland.

Hat’s off to Denmark for taking the necessary steps to secure the health and safety of its citizens. Arlene Blu of the Green Science Policy Institute and Department of Chemistry at the University of California, Berkeley had this to say,

“We congratulate Denmark on leading the way for healthier food and hope this will encourage similar action across the EU, the US and worldwide.”

The European Food Safety Agency is now taking a close look at the risk that PFAS pose to human health. It’s time for the U.S to get on board with this, and we hope to quickly follow in Denmark’s footsteps with tougher regulations to protect the people of our country.