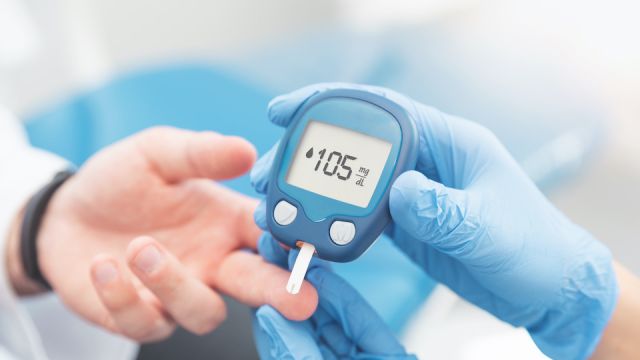 Diabetes affects over 100 million people living in the U.S. That’s a lot of drugs dispersed daily. So, when there’s a drug recall, it affects millions of people. Drug recalls occur when an over-the-counter or prescription medicine is taken off the market because it’s either defective or possibly harmful. Here’s the latest diabetes drug recall.

Recently, Sun Pharmaceutical Industries Issued a national voluntary recall for one lot of the Type 2 diabetes medicine Riomet ER, (metformin). The drug was recalled after lab tests found it contained too much N-Nitrosodimethylamine, more commonly known as NDMA. The contaminant NDMA is a yellow liquid, once used to make rocket fuel. It has no distinct odor but is a known carcinogen, according to the Centers for Disease Control and Prevention (CDC). Here’s what you need to look for:

If you’re taking Riomet ER, the U.S. Food & Drug Administration (FDA) advises you to continue taking your medication. However, contact your doctor for advice regarding another treatment. It’s dangerous to stop taking your medicine without first talking to your health care professional.

Is there another, more natural way to treat diabetes?

Recalls can be scary, especially when you rely heavily on the recalled drug to treat your condition. Several factors can cause drugs to be recalled by the manufacturer, suggests the FDA: Health hazard, incorrect packaging or labeling, and drug contamination. With this in mind, you may want to take a more natural approach to complement your diabetes treatment. However, herbs, supplements, and medicine can be a bad mix if not done correctly, causing blood sugar to drop. Therefore, any changes to your diet and medicine should always be discussed with your health care practitioner in advance.

Diabetes is a “perfect storm”

According to the CDC, over 34 million people of all ages in the U.S. have Type 2 diabetes. Plus, one in three American adults have prediabetes — that’s 88 million people! What’s more, over seven million adults aged 18 years, who were tested for diabetes via lab testing, did not even know they had diabetes. The truth is, diabetes is typically the result of a “perfect storm,” which encompasses poor diet and lifestyle choices mixed with hereditary genes. The following all play a role in the disease, including:

Below are a number of all-natural, self-care remedies that could help improve your diabetes.

Several small studies suggest that taking apple cider vinegar could improve blood sugar levels. One study from the American Diabetes Association found that ingesting two tablespoons of ACV before bed can reduce your morning fasting sugar levels. Another study suggests that taking one to two tablespoons of ACV with meals may decrease the glycemic load of a carbohydrate-rich meal.

Being overweight is the biggest risk factor for developing type 2 diabetes. Experts agree, regular exercise not only helps you lose weight but also increases insulin sensitivity. Belly fat is particularly risky since the fat that surrounds the abdominal organs and the liver is linked to insulin resistance. You are high risk if you are a woman whose waist measures 35 inches or more or a man whose waist measures 40 inches or more.

Since the 1950s, it’s been suggested that chromium contains a glucose tolerance factor that helps prevent diabetes. Mostly found in brewer’s yeast, research reports that chromium may lower blood sugar levels. Some trials have found that supplementing with chromium increases muscle gain and accelerates fat loss during exercise. It’s also thought to improve serum lipid profile and glucose metabolism in patients with or without diabetes. However, Stamford Health warns to be careful taking this supplement if you have kidney disease.

Add a little cinnamon to your coffee

Some controlled studies suggest that cinnamon may reduce fasting blood sugar. However, while some studies report significant drops in hemoglobin A1c, others show no effect. Nevertheless, sprinkling a little cinnamon each day on your breakfast cereal or in your coffee is a safe, non-toxic way to help lower your blood sugar potentially.

Pumpkin seeds are high in magnesium, which is thought to be the reason why it has positive effects on diabetes. A study that looked at over 127,000 people found that magnesium-rich diets were linked with a 33 percent lower risk of type 2 diabetes in men and a 34 percent lower risk in women.

If you have diabetes, you have nearly double the chance of developing heart disease. You also have a higher chance of developing mental health issues, such as depression. However, type 2 diabetes is preventable in most cases. And in some people, it can even be reversed. Be proactive in your health. Talk to your doctor, change your diet, and start moving.