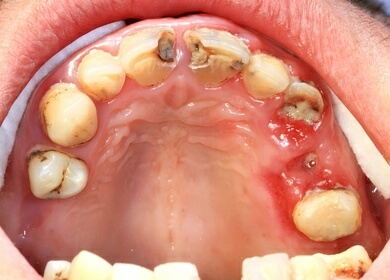 You probably already know by now how bad diet soda is for your health. If you’ve been ignoring the headlines about the numerous research that has proven many of soda’s damaging effects, you might want to pay closer attention.

If you hope to keep those pearly whites, stay away from diet soda. A recent study from the Temple University School of Dentistry revealed that soda consumption rots the teeth due to its acidity, and compared the decay to the effects of methamphetamine. The researchers found that diet soda can just as damaging to teeth as a hard drug addiction.

The study’s leading professor noted that if you, “look at it side-to-side with ‘meth mouth’ or ‘coke mouth,’ it is startling to see that the intensity and extent of damage more or less the same.”

It was determined that there was no difference in the effect on the teeth between sugar-free and regular soda, as it is the constant exposure to the citric and phosphoric acids in soda that causes dental erosion. Drugs erode the teeth as they tend to cause dry mouth, which raises acidity levels.

With society placing so much importance on appearance, tooth erosion could be a concerning factor for many.  Of course, it isn’t all about looks. An unhealthy mouth can lead to a number of health problems, not to mention all of the other dangers of diet soda that we hope you’re already familiar with.

Here is a look at just a few of the health risks which can stem from drinking this popular beverage:

Weight gain. Many people continue to drink diet soda with the idea that it’s good for the waistline. Recent studies have shown that the aspartame used as a sugar replacement may alter brain chemistry causing people to crave higher-calorie foods and make them more prone to obesity, as well as diabetes. In addition, when the body perceives the sweet taste in diet soda as sugar, it causes the pancreas to release insulin as if you were actually consuming sugar.

Toxic overload. Toxins in diet soda, including aspartame, artificial colorings, phosphoric acid and other ingredients place a significant toxic load on the liver and can contribute to toxic sludge in the intestines. An overabundance of toxins can also lead to chronic inflammation and a host of diseases, as well as chronic illness. 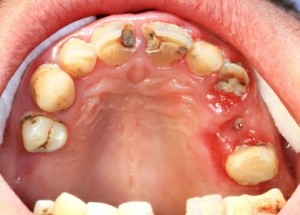 Damage to bones and teeth. Soda is one of the most acidic substances that humans ingest. Not only do the acids in diet soda wreak havoc on the teeth, they de-mineralize the bones, which can lead to fractures and osteoporosis. Too much acid in the body can also cause damage to body tissues and contribute to a haggard appearance, in addition and to many other health conditions.

The best beverage choice for health is pure and filtered water. There is no better drink for overall health and wellness. If you have been drinking soda habitually for some time, try to cut out at least one soda a day and replace it with 12 ounces of fresh, filtered water.

Add some lemon or other organic citrus to your water – it will help make the transition easier. Each week, give up one more soda until you are free from its pull. As you make the change, remember all the great things you are giving to your body.

You can also start adding other healthy beverages such as organic loose leaf teas, which can be made hot or cold. If you like a little sweet boost, add some coconut crystals or even some stevia. Fresh pressed juices and healthy green smoothies are also excellent beverage options, and are full of vital nutrients that feed, not rob,  your body of what it needs to be healthy.

Don’t feel defeated or deprived about giving up your soda. Allow yourself time to make a transition, and slowly you will see what a major difference it makes in how you look and feel. It will all be worthwhile in the end!