Everyone knows that working out is good for us, but what about working out to music? We all have our favorite playlists to get us pumped up and pull us through a tough workout. Most of us are convinced that we would not be able to make it through without our tunes.

Studies show that listening to music while exercising is both motivating and also helps to distract us from any negatives we are feeling, like exhaustion. What about the actual playlist, does your song choice really matter?

The answer to this is absolutely, says Costas Karageorghis, associate professor of sport psychology at Brunel University in England. For over twenty years, Karageorghis has been studying the effects of music on physical performance.

Karageorghis says that the most important part in choosing music for your workout is to pick songs that correspond to your heart rate while you are exercising. So, if you have a high-intensity training session, you will want to aim for a fast-paced, upbeat soundtrack with songs that are at least 150 beats per minute.

For a twenty minute session on the treadmill, 120 to 140 beats per minute is probably a good choice. Similarly, if you are going out for a casual stroll, music with 115 to 118 beats per minute will do the trick.

Play around with the songs on your playlist until you get just the right mix. You can also include songs for warming up and cooling down that have fewer beats per minute. Listening to music that suits your heart rate will motivate you and encourage higher physical performance.

New scientific evidence points to the fact that listening to music while you are exercising may also improve cognitive function. Clinical psychologist Charles Emery from Ohio State University has studied the impact of exercise on patients for a number of years. He recently decided to combine exercise and music to see if the two actually had an increased impact.

Thirty three men and women who were in a cardiac rehabilitation program participated in the study. Each participant’s mental performance was tested after exercising with and without music.

The results were amazing. The participants, on average, performed twice as well on a verbal fluency test after exercising with music than they did without music. In fact, without music, there was no change in performance at all. Although classical music was used in the study, Emery feels that any music, whether it be jazz, hip hop, rock or other, would yield the same results.

Music, Exercise and the Frontal Lobe 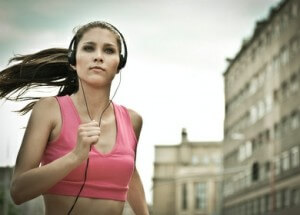 Although we may think of listening to music as being a passive activity, the brain is actually quite busy while the music is playing. It has to sort out timing and tones, as well as the sequencing of sounds, to allow the music to make sense.

Researchers wanted to know what impact listening to music has on the frontal lobe of the brain. This part of the brain is where higher mental functions take place, like thinking abstract thoughts and planning for the future.

To test their theory, researchers had subjects perform a task before and after exercising with and without music. They were given a letter of the alphabet and asked to make as many words that they could think of beginning with that letter. No words could be repeated in the one minute they were given.

After exercising without music, there was no change in performance, but with music, performance more than doubled! Although researchers are unsure how long the effects last after exercising, it seems reasonable to assume that the more regularly we stimulate the brain, the higher we will perform cognitively.

So, crank up the tunes and start moving!