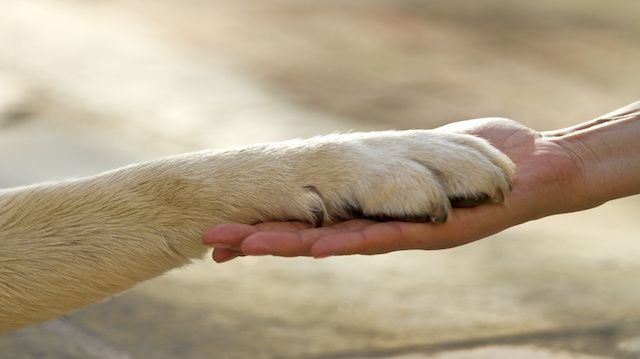 The Milk Bone Foundation, in conjunction with the nonprofit Canine Assistants, an organization providing service dogs for people with disabilities, honors canines that have made a significant difference in the lives of their people or community.

Wrangler, a basset hound from Albion, Pennsylvania, saved his owners’ lives when their house caught on fire. The dog — who had strict orders never to get on the bed — woke up Dennis and Jennifer Stoneman in the middle of the night by scratching at Dennis’s arm. Dennis knew something was wrong by Wrangler’s actions, and realized the house was on fire. He was able to escape, along with Jennifer and their teenage daughter, because of Wrangler’s warning, although the house was heavily damaged. Wrangler now has permission to sleep on the bed.

Tillie, a Spaniel/Irish setter mix, is more than man’s best friend. She is also her basset hound pal Phoebe’s best buddy. Tillie saved Phoebe’s life when she fell into a cistern near their home on Vashon Island, Washington. She stood guard for a week over her friend, leaving only for forays to find help. Help finally arrived, and Phoebe was rescued. Both dogs were then returned to their frantic owner.

A border collie and Australian shepherd mix, Abby, saved her family’s life by letting them know deadly carbon monoxide was leaking into their Hartland, Wisconsin, home. It was early morning, and family members were just getting up, but all of them had flu-like symptoms. Abby jumped on owner Nicole Siekert’s bed and, nudging her, got Nicole to go downstairs. There, Nicole could hear the carbon monoxide detector going off. A blocked exhaust pipe was leaking the deadly gas into the house. Without Abby’s warning, everyone in the house could have died.

Klinker, a black Labrador retriever, lives in Williamsport, Maryland, but travels across the United States on a regular basis. That’s because she’s the only dog in the nation certified to detect the deadly bacteria American foulbrood in beehives. American foulbrood is extremely contagious and often kills entire honeybee colonies. It infects any equipment within the hive. State laws generally require burning of infected colonies and equipment. Klinker and her handler, Bill Troup, may inspect as many as 1,000 colonies per day. When she’s not working, Troup says Klinker enjoys just being a household pet, but she loves her opportunity to work.

Golden retriever and seizure alert dog Rolex literally allows his partner, Rosalie Brown, to get on with her life despite suffering from epilepsy. He can detect when Rosalie is about to suffer a seizure, and she can take proactive measures. Rolex’s presence and help also allows Rosalie to continue working at an elementary school near their home in Duluth, Georgia. Rolex also helps children at the school learn about epilepsy and the purpose of service dogs.

Liberty, a Labrador and golden retriever mix, is a therapy dog who visits patients in hospitals near her Hasbrouck Heights, New Jersey, home. With owner Tom Meli, Liberty also visits local schools and helps kids improve their reading skills. They read aloud to her and she’s never judgmental, even if they have trouble pronouncing words. Reading to a dog like Liberty helps kids gain confidence in their reading abilities.

Chopstick, also a Labrador/golden retriever cross, is the best friend and constant companion of Colin Studlack, from Pottsville, Pennsylvania. Colin has Duchenne muscular dystrophy, which is a genetic disorder resulting in muscle degeneration. Colin may otherwise have trouble getting up and moving about, but Chopstick is always there to help or to let family members know when his boy needs assistance. Wherever Colin goes, so does Chopstick.

If you know of a hero dog, feel free to nominate him for possible “Dogs Who Changed the World” recognition. Criteria include dogs who have displayed “valor, courage and kindness.” Not every dog may literally save a life, whether human or canine, but they make an enormous and crucial difference to the people whose lives they share.