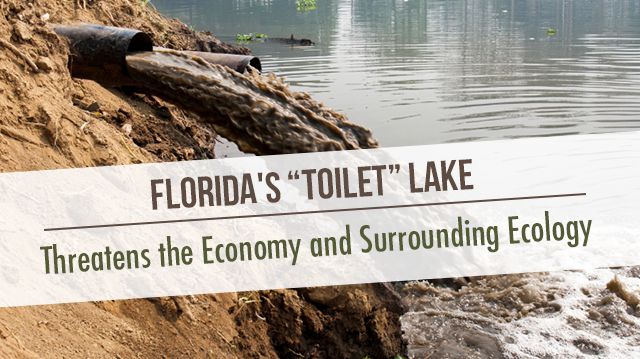 South Florida is one of the Sunshine State’s tourist hot spots, known for its stunning coastline, sandy beaches and captivating wildlife. With the prime tourist season in effect, Florida’s coasts have another less desirable visitor: dark, highly polluted freshwater.

Being the wettest January in over seven decades, heavy rainfall has caused water levels to rise in Lake Okeechobee, located in Central Florida. Due to worries regarding stress on the lake’s aging dike and surrounding communities, authorities drained the water toward Florida’s east and west coasts. Considering this lake has been referred to as Florida’s “toilet” lake, a wide range of complications are arising.

To make matters worse, dirty water had been pumped into the lake from flooded farmland. As you can imagine, this water contained a wide range of chemicals, including potent fertilizers. After 70,000 gallons per second flowed into the Lucie River, it made its way through the Gulf of Mexico and into the Atlantic, significantly threatening marine ecosystems, with oyster beds, fish, coral and birds currently at significant risk.

The usual turquoise-colored waters of the Gulf of Mexico are now covered by a murky brown blanket, preventing the sun from reaching marine plants and coral. As winds pick up, the water foams due to chemicals.

Chemicals from farmlands aren’t the only concern, as bacteria and viruses from septic tanks make their way into the ocean as well. These pathogens are generally killed by the ocean’s high salinity content — unfortunately, the increase in freshwater is allowing bacteria to thrive.

The environment is a critical concern, of course; however, it’s not the only worry among Florida residents. Small businesses and the tourism industry will more than likely feel the dramatic effects of this event, as photographs of the aftermath continue to circulate through social media platforms.

Unfortunately, this is not the first time that Lake Okeechobee has made headlines, as dirty water significantly threatened South Florida’s ecosystem last spring. The toxic water created a boom in harmful algae, killing fish and seagrass. Once again, this algae is a major concern for both wildlife and people who would like to swim.

Related: Shocking Photos of Florida Pollution to be Presented in Washington to Urge Action

What is being done? How can this be avoided in the future?

With the affected areas currently in an official state of emergency, community leaders are reaching out to Washington for its support and assistance. Many agree that heavy rainfall isn’t the issue here  — lax regulations are to blame. Due to the powerful sugar industry, purchasing land south of Lake Okeechobee has been challenging.

The key focus at this time is Everglades restoration, which would allow the flow of water to travel south after being naturally filtered. Discharges would be treated and sent to areas such as Florida Bay, which are in need of freshwater. Numerous environmentalists agree that if polluted water continues to be released at the current rate, it will get worse before it gets better.

With the help of federal lawmakers, environmentalists hope that the state will be pressured to purchase property south of Lake Okeechobee. Money has been set aside for this purpose, but state officials do not appear to be moving quickly enough. This is frustrating to the many voters who provided immense support toward waterway protection.

A spokesman for the US Army Corps of Engineers stated that there’s not much they can do at this point. Since the marshes between the lake and the Everglades are flooded, water will continue to be diverted toward Florida’s coasts. There is no current quick-fix solution. At this point, the hope is for a long-term solution to be implemented — expediting the Everglades restoration projects.

At this time, there are a lot of unknowns. The long-term effects of this event have yet to be seen — both from an economical and environmental standpoint. Although public awareness may hurt the tourism industry this season, it’s important that people understand the situation.

This time something needs to be done with the “big picture” in mind. Sweeping these incidences under the rug until the next occurrence is not a sustainable plan. New legislations must be implemented immediately. While the present damage may not be reversed, positive actions could prevent the next disaster from occurring. This is the ultimate example of when proactive approaches trump reactive efforts.