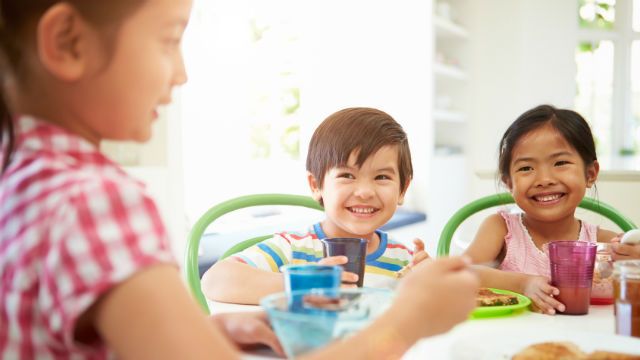 Do your kids tend to eat fortified breakfast cereals every morning? If so, it could be harming their health. A new report by the Environmental Working Group, a health research and advocacy organization, says that “millions of children are ingesting potentially unhealthy amounts” of vitamin A, zinc and niacin.

Fortified breakfast cereals are the leading source of the excessive intake because all three nutrients are added in amounts that have been calculated for adults.

In addition, as pediatrician Hansa Bhargava notes, many parents also give their children vitamin supplements, which is usually okay, but an excessive dosage can be harmful, and combining fortified foods with supplements may be “overdosing” them with too many vitamins. She noted that an analysis of data from a National Health and Nutrition Examination Survey revealed that “13% of kids get too much vitamin A and 45% take in too much zinc,” and that’s from food alone.

The daily values for most vitamins and minerals found on nutrition fact labels were set back in 1968 by the FDA and have never been updated – and, they’re based on adult requirements, not children’s. Too much vitamin A can cause bone abnormalities, brittle nails, peeling skin, hair loss, and even liver failure, in rare cases.

An excess of zinc can impair copper absorption and negatively affect red and white blood cells, potentially leading to anemia. It can also suppress the immune system. Too much niacin can cause symptoms like nausea and vomiting, or a rash.

The recent study shows that more than 10 million American children are getting too much vitamin A; more than 13 million get excessive zinc; and nearly 5 million get too much niacin.

Not surprisingly, a spokesperson for the Kellogg company, maker of a wide variety of breakfast cereals, including some with very high nutrient levels like Product 19 (which is advertised as a “multi-vitamin and mineral supplement cereal”), responded to the report saying that it “ignores a great deal of the nutrition science and consumption data showing that without fortification of foods such as ready-to-eat cereals, many children would not get enough vitamins & minerals in their diets.”

Kellogg adds, “less than 2 percent of all cereals assessed by the EWG made their ‘Top 23’ list, and the vast majority of these are adult-oriented cereals not regularly consumed by children.”

Professor of nutrition at Tufts University, Susan Roberts, who was not involved in the EWG’s report, said that the evidence that supports the claim that millions of children are exceeding the safe upper levels for some nutrients “is fairly good and traceable to excessive marketing-driven fortification.”

Roberts continues, “but right now we don’t have a lot of evidence that it is creating massive health problems. Rather, I would say it is unnecessary, not health-promoting, and in some individual cases may be causing toxic problems.”

Dr. Bhargava says that as a mother of twins, she understands how important this issue is, and doesn’t believe that most kids will overdose on vitamins, particularly if they eat a healthy diet. She notes that the key is to be mindful of the ingredients that are in processed foods.

Ideally, the best route is not feeding children, or ourselves, any processed foods at all – or at least severely limiting them. Going back to basics, as Dr. Bhargava recommends, by serving simple, “real” foods is optimal. The fewer “added” ingredients, the better – and natural foods from the earth are the very best sources of nutrients for you and your kids.