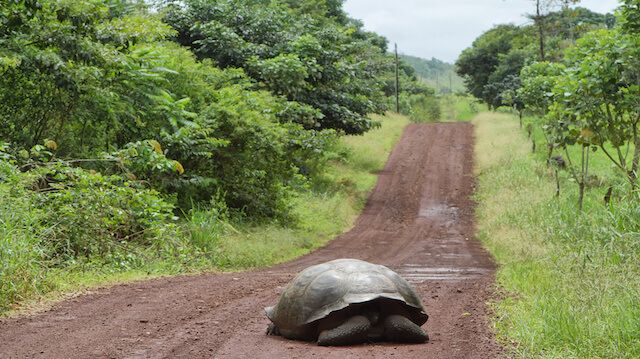 This month Google Earth released its Street View Imagery of the Galápagos Islands, a volcanic archipelago off the coast of Ecuador. This technology will offer a view of the famed Galápagos tortoises. If you want to watch this species, which was once close to extinction, without spending a month’s salary on travel, then this is your chance.

The Galápagos tortoises were once on the edge of extinction, but thanks to long-term conservation efforts, these massive “ninja” turtles are back. Galápagos tortoises can weigh up to 250 kilograms — a notable size — and they are in the top 15 heaviest living reptiles left on the planet. Their weight is just as impressive as their age, with many gracefully reaching the 100-year milestone.

You may not have heard of these amazing creatures, but now you can log into Google Earth at home, the office, or even out at happy hour and catch them doing what tortoises do best. You can pan around from the comfort of your own home and check out these amazing creatures. Keep in mind while panning around the Galápagos Islands from your sofa, these tortoises can go six months without water and live for approximately one year without food. They are true natural wonders in their own right.

You will also get a rare glimpse of some of the Galápagos Islands’ restricted areas — the good stuff you can’t even see on a tour. Raleigh Seamster, project lead from Google Earth Outreach told Outside magazine in an interview, “People are able to see places—where the turtles eat in the morning, where they sleep at night, their migratory routes—they wouldn’t otherwise be able to visit.”

These giant turtles had their first taste of internet fame in 2013. It marked the first time in history the Galápagos turtles were filmed in 3-D. The project was a collaboration between Google Earth Outreach, Galapagos National Park and the Charles Darwin Foundation. In the Outside magazine interview, Pelayo Salinas de Leon, a marine ecologist for the Charles Darwin Foundation said, “The aim was to explore the potential use of street view images for the research and monitoring of Galápagos’ ecosystems.”

These giant tortoises are a hallmark of the islands, and continued conservation efforts for them, as well as other species, is of the utmost importance. They were once a flourishing species when the first explorers dropped anchor off the shores of the Galápagos Islands in the sixteenth century. But by 1960, due to centuries of overhunting, their numbers had dwindled to approximately 15. Thankfully, they have been one of the biggest success stories in conservation, with over 3,000 Galápagos tortoises roaming the islands today.

The tortoises have become stars, and in 2014 a second expedition was commissioned to track the Galápagos’ most famous inhabitants, mapping their movements and habitat via Google Earth’s Street View Trekker. The Trekker is exactly as the name implies. It is a bulky camera device strapped into a backpack and slung over the shoulders of one lucky participant associated with the project. “The park arranged for the trekker to go to some of the places that are off-limits to tourists, where the tortoise had been restored to its natural habitat,” said Seamster. 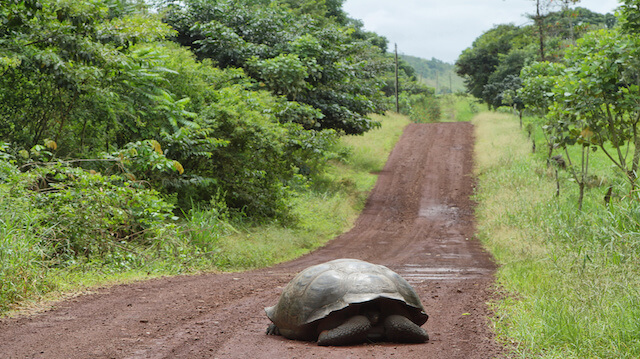 The project was launched in December of last year and the images are amazing! You can view the Galápagos tortoises in their natural habitat. And their habitat is just as breathtaking as they are. The Google Street View allows you to catch a rare glimpse of the varied environments the Galápagos boasts. “These are places you can’t drive to, can’t visit, and we’re bringing them across the world,” Seamster added.

Tired of the same TV drama? If you are looking for some alternative ways to see the world without packing up the kids or depleting your travel account, spend an evening in and take a peek at what the Galápagos tortoises are up to. Speaking of kids, what an excellent and alternative way to get them engaged!

This may even be the perfect catalyst for discussing conservation and why it is so important to make moral and ethical choices that create a better world. Viewing the Galápagos Islands from your computer screen may even spark the adventurer in you to dust off your trail pack and put on your hiking boots to experience more of the beautiful world we inhabit. Where would you go?