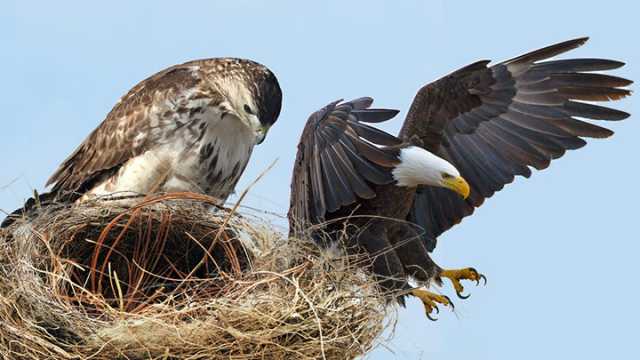 Being adopted by your own natural mortal enemies might not seem like the best start to life, but Spunky the hawk is defying the odds. First discovered in British Columbia by wildlife researchers back in June, Spunky immediately raised eyebrows. He is, after all, the only red-tailed hawk living among a family of bald eagles. Generally, these two varieties of birds of prey are vicious enemies, and will often kill each other on sight.

Yet Spunky is different. Researchers say he acts just like the eagles around him, and has even adopted some of their hunting practices. “This guy has definitely imprinted on bald eagles, and thinks he’s a bald eagle,” raptor specialist David Bird told the Vancouver Sun.

It’s unclear how exactly a hawk found its way into an eagle family, but researchers have a few theories, according to National Geographic. The most likely answer, they say, is that the eagles preyed on Spunky’s family. Somehow, an unborn Spunky ended up in an eagle nest. Perhaps one or more of the eagles’ natural paternal instincts kicked in when they saw a defenseless chick in their nest, and they may have started feeding Spunky.

“My guess is that this little guy begged loud and hard for food — not even thinking about the danger,” he told the Vancouver Sun. “Food overrides everything in these birds. He begged away and mom and dad said, ‘Okay, here’s an open, gaping beak. Let’s put food in it.'”

Other birds may not have been so lucky

Such instances aren’t unheard of, though usually the outsider — in this case, Spunky — would be eaten by the other chicks. However, researchers speculate that an abundance of food in the area might have saved Spunky from a grisly death, and given him time to integrate with his adopted family.

In turn, Spunky has adopted many of the mannerisms of eagles. While hawks typically hunt small mammals and reptiles, Spunky seems to prefer fish like flounder – a prey normally reserved for eagles.

However, he is showing some signs of his hawk nature. Researchers say they have seen Spunky swooping to the forest ground and collecting small items like twigs, which is a classic behavior seen among young hawks honing their hunting skills.

It’s behaviors like this that might be critical to Spunky’s survival in the future, researchers say. “He only needs one error and he’s dead,” biologist David Hancock told National Geographic.

How Spunky will survive from here

Within the next few months, the eagles will begin their annual migration northwards to join a feeding frenzy on Alaskan salmon. Hawks, however, usually remain behind, and Spunky might need to do so in order to survive. Spunky may also need to learn to avoid other eagles in the wild, which probably won’t treat him as graciously as his adopted family currently does.

For now though, Spunky is a rare example of a bird that has somehow managed to bridge the gap with his natural enemies. In that sense, perhaps he’s a bit of a role model for the rest of us.

To see Spunky in action for yourself, check out this video from National Geographic: