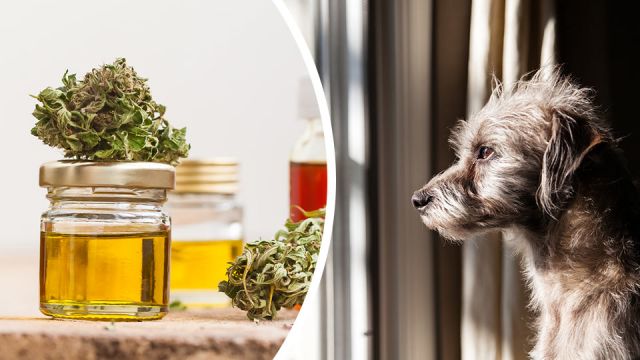 I once looked after an adorable American Bull Terrier named Zach. He was a rescue dog who had been maltreated in the past, but he was adopted by a wonderful new owner who gave him a good home and his personality blossomed. Although he looked intimidating, he was really a sweetheart.

Zach took me into his inner circle from the moment we met, which is unusual for this breed. I was only his dog sitter, but I think he sensed I was in his corner and, in his own way, he adopted me too. The only problem, he became extremely distressed whenever he thought I was leaving him alone.

Separation anxiety can cause pets to act out

Over time, Zach ultimately outgrew his separation anxiety. But some pooches never do. It’s a common cause of distress among dog owners — they can’t leave the house for fear that their canines will act up by tearing the furniture to shreds or barking and howling until the neighbors complain.

Other common symptoms of separation anxiety in pets include urination and defecation issues, escape attempts, excessive scratching and licking and repetitive behaviors like pacing. Socialization techniques, training and conditioning can sometimes help alleviate some of these symptoms, but many owners ultimately resort to “doggie Xanax” prescribed by their vet.

More recently, however, many dog and cat owners are exploring the use of CBD, a compound found in hemp oil, which works with the endocannabinoid system to temper anxiety. Although there are not a lot of studies exploring the effect of CBD on pet anxiety, many owners believe this plant-based compound makes a big difference for their dogs and cats.

For instance, according to a survey published in the Journal of the American Holistic Veterinary Medical Association, almost two-thirds of all pet owners who purchased CBD products for their animals believed that they were helpful.

What is CBD and how does it help counteract anxiety?

CBD is a compound found in both marijuana and its close cousin hemp. Unlike THC, which is responsible for marijuana’s psychoactive effect, CBD is not mind-altering or toxic. Research indicates that CBD has anti-inflammatory, anti-anxiety, analgesic and anti-cancer properties.

Scientists believe that CBD works by binding to receptors in the endocannabinoid system, which is central to an organism’s sense of homeostasis (balance), as well as receptors in the brain involved in serotonin signaling.

By boosting transmission of the “feel good neurotransmitter,” CBD is thought to enhance feelings of well-being. CBD is also believed to promote neurogenesis, which can help regenerate neural regions (such as the hippocampus) that may be damaged by stress hormones.

Much more research is urgently needed, but small studies involving humans suggest that CBD is safe and effective in alleviating many forms of anxiety. Brain imaging studies also indicate that CBD improves cerebral blood flow, which is “consistent with an anti-anxiety effect.”

Cannabis-based medicine (which includes both marijuana and hemp) is attracting a great deal of attention. But the THC in pot can be dangerous for pets. For that reason, most vets try to steer pet owners in the direction of hemp products, which contain beneficial CBD, but only trace amounts of THC. Here’s a quick overview of the difference between marijuana and hemp and what you need to know before considering cannabis-based medicines for your pet

CBD is okay for pets (but THC can be dangerous)

Interest in marijuana and hemp to treat medical ailments is reaching new highs. Recently, the FDA approved the first-ever cannabis-based drug to treat epilepsy, Congress has called on the VA to study cannabis to treat PTSD, and physicians, citizens and lawmakers across the country are demanding sweeping reforms when it comes to medicinal weed.

The clamor comes and an increasing body of evidence indicating that pot is efficacious for treating a broad range of conditions including anxiety, inflammatory disorders, pain, muscle spasms, autoimmune problems and much more.

Not surprisingly, many people are wondering if the benefits of this plant-based remedy might extend to their pets too. Many veterinarians believe there is evidence that compounds in cannabis — most notably CBD — can be beneficial to pets.

But there is widespread agreement among veterinarians that the main active ingredient in marijuana — THC — can be toxic to both dogs and cats. Recognizing this, is it possible for your pets to get the benefits of cannabis-based medicines without putting them at risk? Here’s a checklist of things you need to know before you consider giving your pet a cannabis-based product.

Experts agree it’s imperative to consult with a vet before treating your dog or cat with a cannabis-based product. THC (the psychoactive ingredient in marijuana) may have medical benefits for humans, but pets are far more vulnerable to its effects. In some cases, pets exposed to THC can suffer seizures, coma or even death. As a result, it’s highly inadvisable to give your pets any form of cannabis medicine without discussing it first with a vet that’s familiar with your dog or cat.

Most cannabis-based therapeutics for pets are made from hemp oil (not marijuana). The active ingredient in these products is CBD, which is not psychoactive and generally not toxic to pets. However, hemp oil can contain trace amounts of THC. In most instances, these amounts are so minuscule that they pose little or no risk to your pet.

But because these products are not tested or quality-controlled by the FDA you should be very careful about buying them from reputable sources. Once again, you should not consider treating your dog or cat with hemp oil until you’ve discussed the matter with your vet.

“Research on cannabis for the veterinary population is its infancy” according to Narda G. Robinson, a leading authority on integrative medicine. For that reason, there are few studies showing how cannabis-based products may help pets. However, there’s a growing abundance of anecdotal evidence that CBD can benefit animals in many ways.

As Jamie Gaynor, a veterinary anesthesiologist based in Colorado explains, “Hemp has zero addiction potential, and we have great physiological data now emerging that it can be really beneficial. It can be beneficial for lots of different pain. We have found also that it can be really beneficial for anxiety, and in a number of dogs it can have an antiepileptic effect pretty consistently.”

More research is on the way

Encouraged by anecdotal reports, scientists are trying to conduct peer-reviewed studies on the effectiveness of CBD products for pets. Some of the largest studies underway are taking place at both the University of California and the University of Colorado, which are testing the safety and effectiveness of CBD products for pets. The American Veterinary Medical Association is calling on state and federal restrictions that limit research to be lifted.

The endocannabinoid system in dogs and cats is very similar to that of humans. Therefore, scientists are confident CBD derived from hemp will provide many of the same benefits that it does for people.

Currently, veterinarians and scientists are hoping that CBD could help treat separation anxiety in pets, the pain associated with inflammatory conditions like arthritis and seizures in dogs. Here’s a quick list of CBD products designed with pets in mind:

Despite much promise, experts caution that CBD products are not regulated by the FDA. As a result, it’s imperative for pet owners to do due diligence on them. That means buying products only from reputable suppliers, making sure products are tested for purity and are vet approved. Most importantly, you should discuss all CBD-based medications, supplements, oils and tinctures with a veterinarian that’s familiar with your dog or cat.