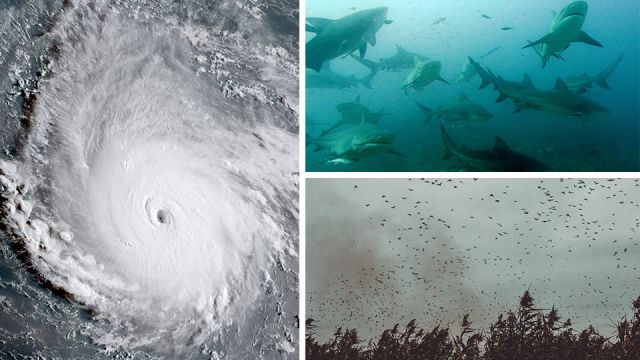 I was watching a flock of birds fly by my house this morning and thinking of all the wild animals caught in the way of Hurricane Irma, currently barreling down on nations in the Caribbean. What happens to animals during such a mammoth storm?

I did a little digging and found that the impact of a hurricane affects creatures way before it does humans. The destruction starts deep in the sea and in the air before the storm even reaches land. And it doesn’t end when the storm passes either.

As hurricanes move over the ocean, warm surface waters mix with cooler, deeper layers. In shallow areas along the coast, cool rain can mix with cool surface waters, which makes water less saline. Waves from the storm destroy objects beneath the surface and shift tons of sand from the seabed. All of this chaos can wreak havoc on animals beneath the surface of the water.

Other creatures have to take the full insult. Fish and invertebrates can be driven to land by the storm surge and become stranded. When Hurricane Andrew hit Louisiana, for example, officials estimated that more than nine million fish were killed offshore. During the same storm, experts estimated that 182 million fish were killed in the Everglades Basin.

Coral reefs can also be destroyed. If any animals do survive, it takes years for them to recover. Violent storms can kill fish, sea turtles, crabs and other marine organisms. Dolphins and manatees have even been blown ashore during rough storms.

FACT: Sharks are the only creatures under the water that can sense the change in barometric pressure associated with the storm and depart from the area.

Shorebirds often move further inland for protection before the onslaught of a heavy storm. Winds, storm surges and waves can cause both beach and dune erosion, which can heavily impact many species of animals who make their homes in ecological niches in coastal dunes and sandy areas. In some cases, the beach can even disappear. Sea turtle nests can be washed out entirely or flooded by water surges, along with the nests of terns and plovers.

On the ground and in the trees

Animals that make their home in trees are better off than those that are on the ground. Tree mammals and birds brace themselves and ride out storms. The poor creatures on the land, however, are often drowned. Even if they survive, their food sources may be severely compromised.

Strong gusts from tropical storms and hurricanes can send birds flying off course and push them far away from their home habitat. During one severe storm, a North Carolina brown pelican was found on a nightclub roof in Halifax, Nova Scotia. Younger birds and those that are sick and weak may become separated from their flock and not be able to find their way back.

In 1992, Hurricane Andrew brought massive wind velocities to the shore and knocked down 80 percent of all trees on several coastal Louisiana basins. The loss of coastal forests and trees during Hurricane Katrina in 2005 displaced many species that were dependent on those forests for shelter and food.

Sometimes hurricanes and strong storms can disrupt the ecosystem for good. For example, the Hawaiian island of Kauai is overrun by feral chickens. Apparently, the population went crazy when a hurricane blasted through chicken coops.

Massive amounts of rain in upstream areas can wash soil, sediment and dangerous pollutants into coastal and marine environments. When Hurricane Agnes passed, the cloudiness of the water was so severe in the Chesapeake Bay that the native grasses died. These grasses provided homes and spawning areas for crabs, fish and other species. It took a very long time for the bay to recover. Coral reefs also suffer when sediment blocks sunlight and causes algae to grow.

In coastal habitats, there is a fine balance between saltwater and freshwater. With powerful waves crashing on the shore, massive amounts of salt water are spilled into freshwater and brackish areas. Vegetation and animals that are not tolerant to salt can be severely harmed and killed by the onslaught of the salty water. Grasses, crabs, minnows, insects and other creatures living in the freshwater and estuarine areas are all at risk. Because the salt water stays around for a while, some bottomland forests and trees can also be killed.

It is equally devastating when heavy rains dump fresh water in coastal area river basins, called watersheds. This causes massive amounts of fresh water to surge downstream into coastal bays and estuaries. This also turns the fresh water/salt water balance upside down. Normally brackish water can remain fresh water for months after a hurricane, placing great pressure on all species living there.

In the eye of the storm

Interestingly enough, the eye of the storm — which has fast-moving walls of intense wind — can form a massive “bird cage” that holds birds inside. This eye effect often displaces birds as much, or more, than strong winds.

Yes, hurricanes have a massive impact on wildlife but there is some good news in the midst of all this destruction. Just like wildfires can create opportune conditions for species to colonize, hurricanes can open up new opportunities for some animals as well.

Storms may strip foliage off and knock down trees but now these areas are more open to sunlight and new seeds can germinate. There is also evidence that hurricanes allow new species to colonize. In 1996, for example, 15 green iguanas floated on a tangled raft of trees from Guadeloupe to their new home on Anguilla, across the Caribbean Sea. Scientists say this is a way that species can be naturally introduced into new areas.

What you can do to help

The Wildlife Center of Texas has taken in 60 wild baby animals, mostly squirrels because of #Harvey and expecting many more. @kprc2 pic.twitter.com/x3en7FmccX

After a storm, be on the lookout for unusual or rare species that may show up in your area. Alert your local wildlife agencies if you see anything unusual. Also, wildlife rescue operations should be contacted if you find a wild animal that has been injured. Avoid trying to handle any wild animal on your own — this could cause injury!

After the hurricane in Texas, it was amazing how many reports of wild animals were being shared on social media. People were reporting floating carpets of fire ants, snakes swimming, orphaned squirrels and alligators in backyards. All of these animals had been displaced by the teeming rains and wind.

David Steen, a reptile expert and assistant research professor at the Auburn University Museum of Natural History, has this to say about wildlife and storms:

“Be conscious of where you put your hands and feet and do not try to mess with animals,” he said. “Getting in a fight with you is really low on the list of a snake or alligator’s priorities right now. They’re trying to get through the storm, too.”

Once the storm has passed, if you have bird feeders in your yard, be sure to fill them to the top — the hungry birds will thank you.