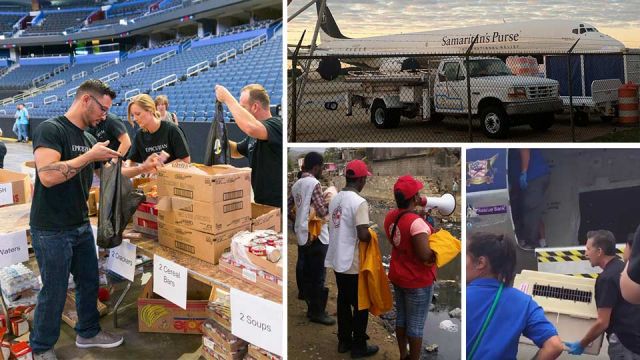 With three hurricanes in the Atlantic, it can be overwhelming and a bit confusing when it comes to preparation and post-hurricane assistance. Nevertheless, people are coming up with some interesting ways to help out.

Organizations in U.S. step up to help

The Alternative Daily CEO, Jake Carney, reported on Friday that the Atlanta speedway is offering evacuation parking. This gives people a place to sleep in their cars, and access bathrooms and other facilities.

JetBlue and Delta have pitched in by offering cheap plane tickets out of the storm’s path. JetBlue capped available seats out of Florida at $99, and Delta also announced caps, as well as additional flights to and from San Juan, Miami, Palm Beach, Fort Lauderdale and Key West.

The #HurricaneIrma weather waiver has been expanded to include airports along the GA & SC coast. More details here: https://t.co/gbzDBxHrhU

Walmart has also rounded up supplies from its various warehouses in the U.S. in order to get bottled water to Florida. The company says the effort involves deploying 1,360 truck loads.

The Red Cross, meanwhile, is mobilizing volunteers from around the U.S. to help out in emergency shelters, with logistics and with mental health counseling. It says it is “rapidly training new volunteers” to head to Florida over the next few days and is pre-deploying emergency response vehicles before the hurricane hits.

We are mobilizing a massive response for Hurricane #Irma. Learn more and get #tips to prepare: https://t.co/8wDuHR7S7Q pic.twitter.com/zSnWq79uCb

Salvation Army volunteers have also picked up food trucks and driven them to Texas, which is still recovering from Hurricane Harvey. The charity is also collecting donations and gifts, such as generators, to eventually provide to Harvey and Irma victims.

With perhaps strange priorities, Reuters also reported that an emergency response team was being deployed to move million-dollar wine collections out of the path of danger.

Preparations in Cuba and Haiti underway

In Cuba, expecting to be hit Friday, the government and the World Food Programme are working together to guarantee that affected areas have enough food. The country has put aside 1,606 tons of rice and beans to cover 275,000 people for the next month.

.@WFP is the world’s first responder, and it’s ready to mobilize in response to #HurricaneIrma. Help in emergencies: https://t.co/nzaetGmqAZ pic.twitter.com/ZGgjvvgABM

In Haiti, a country which has been devastated by earthquakes, hurricanes and flooding over the last decade, the capital city mayor said emergency shelters were being prepared. Haiti lost 580 people in Hurricane Matthew last year, and up to 300,000 people in an earthquake in 2010. Municipal Civil Protection Committee of Port-au-Prince volunteers are mobilizing during and after Irma passes, in order to provide assistance to possible victims.

Volunteers assist in the U.S. and Carribean

A lot of people are volunteering in order to help Florida to prepare, and help people in the Caribbean repair.

Volunteers line up to accept plane load of animals from #Florida and @ReadyBroward ahead of #HurricaneIrma to make room in shelters there. pic.twitter.com/u9wUFz4BFs

Behind the scenes at @MiamiDadeCounty Emergency Operating Center, coordinating #HurricaneIrma volunteers. Sign up at https://t.co/5gXwFrNTA9 pic.twitter.com/gG4eKFNinq

Volunteers of #Haiti #RedCross are mobilised to alert the populations before #HurricaneIrma @KwaWouj pic.twitter.com/rIpJNKmuMj

@SamaritansPurse is sending supplies and volunteers to #StMaarten to help with #HurricaneIrma disaster relief @WXII pic.twitter.com/YZLPWVukFj

If you’d like to help the victims of Hurricane Irma, you can donate to the American Red Cross here or UNICEF here.