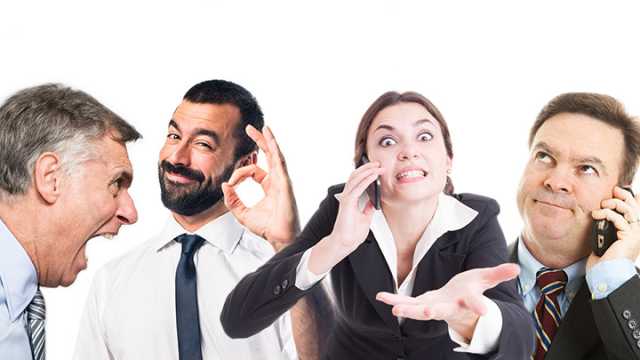 One of the first things I discovered about the workplace is that controlling or incompetent bosses don’t just rear their heads in movies like “Horrible Bosses” or sitcoms like “The Office.” Real life versions of these bosses exist. Whether you work for a large multinational corporation, a nonprofit organization or a small business owner, you’ll likely come across several types of bosses. Some may be quirky, downright odd or plain old nasty. Here are four types of bosses and how to successfully deal with their off-putting management style.

“You’re a punctual guy… you know the importance of arriving right at 6 a.m.”

It might be only a minute after your starting time; still, your boss is going to make sure to berate you for being late. Sure, you worked over the weekend and there’s a raging blizzard outside, but he wants you to know that he owns you.

When your boss is a power-tripping bully, even simple retreats to the restroom or vending machine can turn him into a cubicle-hovering, control freak that demands, “where you’ve been?” My stint at a large pharmaceutical company found me with not one but two power tripping bullies, who often flaunted their authority in a rude and disrespectful way. They demeaned subordinates during meetings and in front of coworkers. They also threatened their employee’s positions if their demands weren’t met.

How to deal with a power-tripping, bully boss

Next time you’re being raged-on, confront your bully boss head on. “I will not put up with your behavior, and you have no right to speak to me that way!” From personal experience, it is surprisingly effective. After confronting both bullying bosses I quickly became “off-limits” to their bad behavior. Eventually, when I left the job, it was on my terms — not theirs. If you allow others to bully you, they will. If you don’t, they won’t. You may also want to privately point out how his or her behavior is viewed by others.

There could be worst things, right? Who wouldn’t love Michael Scott as a boss? Well, here’s the thing with bosses who want to be your buddy. They can sometimes be a working contradiction. Sure, he or she is nice; after all, the buddy boss wants to be liked. But after you’ve exhausted they’re “niceness” by leaving early or handing in a report late, your next performance review could find you without a raise or promotion. Just because you’ve gone for drinks after work or he’s stalking you on Facebook doesn’t mean he’ll pull you up the corporate ladder.

If your boss wants to be your buddy, go ahead and have fun with him — “that’s what she said.” Just make sure you balance work time with play time. It’s okay to be friendly with your boss, just don’t let your work slack off as a result. Be friendly, but be professional.

3. The “just do it” over-demanding boss

“Please bore someone else with your questions.” — The Devil Wears Prada

Who knew working for this boss meant you had to be a telepathic, time-traveling, miracle worker? Most jobs are demanding, but your boss has taken it to a new level. “Just do it” is her mantra. She puts excessive pressure on you with unreasonable deadlines and won’t take the time to find out in advance what’s reasonable. What’s worse, she takes no time to make sure you have the tools to complete the assignment, and she’s unapproachable when you have questions. In addition, she displays little interest in your well-being and gives you little recognition when you do complete your tasks.

How to deal with an unreasonable boss

Consider why your boss is being so demanding. Is it just a personality problem? This hyper sense of entitlement may stem from a need for perfection and a need to control.  Or, he or she is being pressured from higher ups to meet certain goals. Either way, don’t take it personally. Your boss is probably more focused on delivering results to his or her own boss rather than your feelings of inadequacy.

…But that doesn’t mean you need to be a punching bag either. Stop taking it on the chin with a smile on your face. Confront your boss calmly and professionally. If you’re unsure about the direction, ask questions. At the end of your meetings, repeat back your responsibilities to make sure you’re on the same page. If your boss hears you rattle off your responsibilities, she may just realize how unreasonable her demands are.

“Ah, we have sort of a problem here. Yeah, you apparently didn’t put one of the new coversheets on your TPS reports… did you get the memo?” — Office Space

I once had a boss tell me that he was a great boss because, unlike other bosses who would (metaphorically) stab employees the face, he would only stab employees in the back. When you have a passive aggressive boss, they generally talk in circles. They leave you with the impression that you’ve screwed up, but without actually giving you any concrete information on what you’ve done or how you can improve. They’ll avoid confrontation at all cost, but love to hold grudges, all the while signaling something is wrong. They’re sticklers for dumb pointless rules, which allows them to strike out against you without consequences. They hurl insult after insult and finish their sentence with “just kidding.” This can really mess with your head.

How to deal with a passive aggressive boss

First, don’t take it personally, because chances are it’s not personal to you alone. He or she probably treats everyone in the office the same way. That said, stand up for yourself (professionally) because only then can you make this type of harassment stop. When it comes to conversations around projects or goals, be sure to send a follow-up email that documents the conversation and your responsibilities. Also, make sure to get a response from your boss so that you can reference it, if necessary, to clear up any confusion thrown your way.