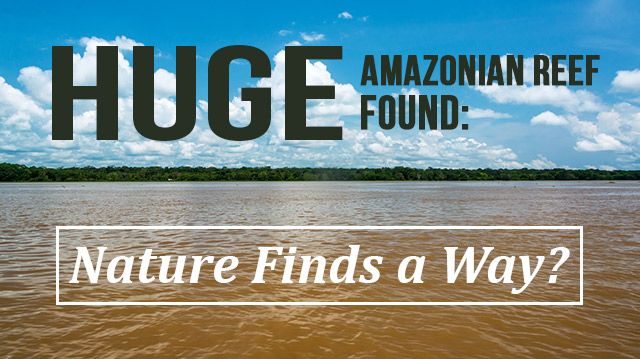 Climate change is real. You’ve probably experienced a small part of the effects yourself. As I write this from Texas, it’s early May and 48 degrees outside — unheard of just a few years ago, but it’s the new reality. Undoubtedly, we are responsible for these changes, but a recent discovery has shown that life finds a way.

A team of Brazilian and American scientists say they’ve found a massive reef that covers nearly 3,600 miles — more than 600 miles long — at the mouth of the Amazon River in South America. Say what? Scientists have kept a close eye on the Australian Great Barrier Reef, where delicate and vulnerable species have been greatly impacted by climate change. Ocean acidification, rising sea levels and temperatures, and a higher number of severe weather conditions have stressed the reef greatly. Meanwhile, another huge reef has formed right under our noses and in arguably worse conditions.

“Coral reefs usually don’t thrive in muddy waters, like the mouth of the world’s largest river, but the Amazon has a freshwater outflow,” said reporter Catherine Osborn. “It appears to have produced a reef with over 60 species of sponges and 73 species of fish, spiny lobsters, sea stars, and other ocean life. The reef stretches from the coast of French Guiana to Brazil’s Maranhão state.”

According to the research article published in Science Advances this April, the Amazon River represents a whopping 20 percent of the globe’s river discharge to the ocean, making it a very muddy place. It significantly impacts the North Atlantic where it dumps out into the ocean. Those impacts come in the form of sediment, poor pH levels and acidity, salt content and light penetration.

Yet at least 29 types of sponges were collected by the team (technically no coral, however) and more are waiting to be identified. There may be new species in the sample lot. That’s exciting news.

None of this is to say that we should excuse climate change; it’s just that it’s not all doom and gloom. Perhaps astrophysicist Neil deGrasse Tyson said it best in an interview on MSNBC:

“No matter what happens in climate change, our species will still be here, it’s just that the thousands of years over which we created our civilization took place over a kind of climate that we are exiting right now. A climate range we are exiting, and we are responsible for that,” said Tyson.

Our coastlines will disappear. Tyson posits that in New York, the water level will rise to the Statue of Liberty’s elbow. Goodbye Manhattan! See you later, L.A. Au revoir, New Orleans. And that’s just in the United States. Sure, we’d adjust, but who knows what might await us on the other side of that kind of change?

We shouldn’t forget that great line from the movie Jurassic Park: “If there is one thing the history of evolution has taught us it’s that life will not be contained. Life breaks free, it expands to new territories and crashes through barriers…I’m simply saying that life…finds a way.”

Now if we can manage to not destroy that life, it will be a miracle. The new reef, which is made primarily of rhodoliths and sponges — instead of coral — is dangerously close to oil drilling sites. According to scientists, “in the past decade, a total of 80 exploratory blocks have been acquired for oil drilling in the study region, 20 of which are already producing.”

There’s a pattern here that most of you will probably recognize: Climate change is real, the earth reacts, we keep doing the same thing we’ve been doing and call it a good business move. Yes, life does find a way to keep going and keep creating, but we’re still responsible for the problems our actions are causing. If we’re not careful, humankind may have to adjust in huge ways because Mother Nature will adapt, but it’s questionable that we’d be as successful at it.