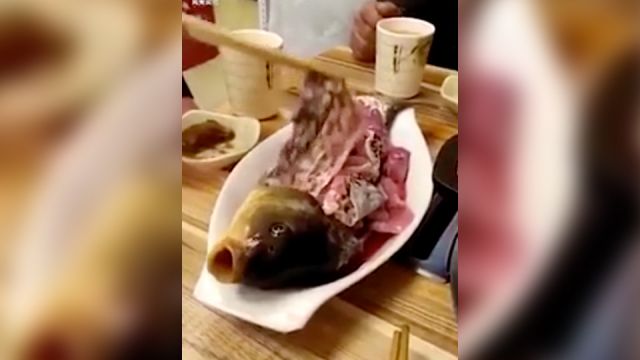 Footage continues to emerge of people dining on live seafood, insects and other animals. We recommend caution if you decide to watch these videos (below), where people have filmed themselves eating what look like live mouse babies dipped in soy source, a live and scaled fish, plates of live bugs, still-alive octopus parts, gutting a living frog and laying it on a plate with salad adornments while it’s still blinking and moving around, and more.

But beyond caution, we also recommend understanding which of these videos pertain to a deep cultural tradition, and which ones are purely exploiting animal torture for the sake of a few clicks.

Warning: these videos may be disturbing to some viewers.

In the U.S., Europe and around the world, it is common practice to eat oysters and lobsters alive. Restaurants in New York give customers the chance to “pick belly sashimi out of (the lobster’s) still moving body.”

In China, drunken shrimp, or qiang xia, is a delicacy that involves clawed river shrimp soaked in baijiu or another spirit. In about one minute, the shrimp become drunk, and therefore thirsty, but instead of giving them water, they are given a sauce, which they quickly absorb. The shrimp are served alive and twitching in a glass goblet with a lid — which keeps them from jumping out.

It’s also possible — but perhaps not so common — in China to get yin-yang fish: a fish whose body is deep fried while it’s head is protected. “Speed is the key — when you prepare the fish, you can’t hurt its internal organs, so when you serve it, it can stay alive for at least half an hour,” said restaurant owner Chang, in Chiayi.

In Japan, ikizukuri is sashimi that is prepared while still alive. Typically fish are used, but octopus, shrimp, lobster and even frogs have been used. The idea of this dish, like many others mentioned here, is that the movement of the fish on the plate suggests freshness. Japanese odori ebi are similar to the Chinese drunken shrimp, and the dish involves dipping live baby pink shrimp in sake.

Sannakji is a Korean dish where live baby octopuses are served whole or in small pieces with sesame oil. It is eaten while the octopus is still squirming.

Finally, in India, once a year, asthma sufferers eat live sardines smeared in spices as a cure for their ailment.

One of the more infamous videos of someone eating a live animal purely for social media popularity, however, came from Louis Cole, who ate a live goldfish. The video of that can be seen above, though most of his live-animal videos have been removed or taken down. He also created videos where he put dead mice in a blender then drank the resulting “smoothie,” and ate a live tarantula, live locusts, a live scorpion and a live lizard. The videos gained him a following, which has enabled him to now focus on travel videos.

Other people are also making videos of themselves eating live animals, particularly spiders and scorpions. Their sole purpose is the thrill and participating in the dares and challenges trend that has thrived on Youtube and social media.

How cruel is eating live animals?

Those like Louise Cole who do eat (or have eaten) live animals will most often argue that a being eaten alive is as quick and pain-free, if not quicker, than the way cows, chickens and pigs are raised and killed for their meat.

Others, such as Wendy Higgins of the Humane Society International, argue that the seafood “will have endured the unspeakable horror and pain of being eaten alive, all to satisfy diners’ lust for extreme cuisine. Their ordeal is protracted and disgusting.”

“Basic respect for animals as sentient, thinking, feeling creatures is absolutely fundamental to protecting them; without that, it becomes so much easier for people to divorce themselves from the pain and suffering that they commit,” she told MailOnline.

Cephalopod expert Jennifer Mather, an author of various studies on octopus and cephalopod sentience, explained that octopuses both anticipate and feel pain, and can also remember it.

“The octopus has a nervous system which is much more distributed than ours. If you look at us, most of our neurons are in our brain, and for the octopus, three-fifths of its neurons are in its arms… the octopus, which you’ve been chopping to pieces, is feeling pain every time you do it. It’s just as painful as if it were a hog, a fish or a rabbit, if you chopped a rabbit’s leg off piece by piece. So it’s a barbaric thing to do to the animal,” she said.

On the other hand, philosopher Peter Singer’s position on eating live oysters has changed over the years, with him concluding in 2010 that there is little evidence they have the capacity to feel pain.

Grossness and cruelty are subjective

However, Cole has argued that his eating-live-animals videos “rile people up a bit and challenge them to the reality that to eat meat, they have to kill an animal.” While eating some of the smaller animals alive kills them in a matter of seconds, pigs on a pork farm, for example, spend their lives cramped up in tiny crates where severe injuries and infections are the norm, and pregnant pigs are beaten and kicked.

What’s gross, he says, can depend on what you’ve grown up to be used to. “I’ve been to lots of developing countries: in South Africa, we were in a food market in one of the townships and they were selling cooked sheep’s heads,” Cole said. “People were cracking them open and eating the brains the way you or I would eat a kebab.”

Ultimately, even Cole argues, “Obviously we need to treat animals ethically. But a much bigger problem is addressing human problems around the world like extreme poverty or the conditions that people are living in.”