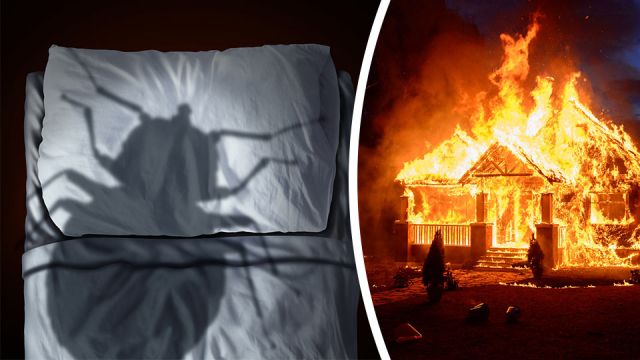 Ten people were left homeless over the weekend when a woman accidentally set her two-story home ablaze late Friday night in order to fight bed bugs.

The woman was reportedly trying to combat the bugs with rubbing alcohol, in a multi-family home in Cincinnati. It appears she was near a flame while using the alcohol. A resident took this video of the house burning down.

According to WXIX-TV, this is the second time in just two weeks in the state that a fire has resulted from attempts to combat bed bugs. The other incident occurred when a teenager set fire to an apartment after dousing a bed bug with alcohol, leaving eight people homeless.

In a reversal of events, in October this year, three people died in Mexico from ticks, then health authorities burned their house down in order to control the tick plague, which was extensive.

Though they may not be as scary as a house on fire, most common bed bug killers are toxic and will do more harm than good. In an eight-year period, California for example, had more than 7,600 pesticide poisoning cases, with around half of those cases taking place in the home or garden rather than in agricultural areas.

When it comes to bed bugs specifically, the Centers for Disease Control and Prevention counted 80 illnesses and one death linked to bed bug pesticides over a period of three years. The death involved a woman who used 18 cans of chemical fogger to attack the bugs.

Once a bed-bug infestation gets serious, most U.S. authorities recommend using professional services. However, in the early stages, there are healthy and green strategies to beat bugs: