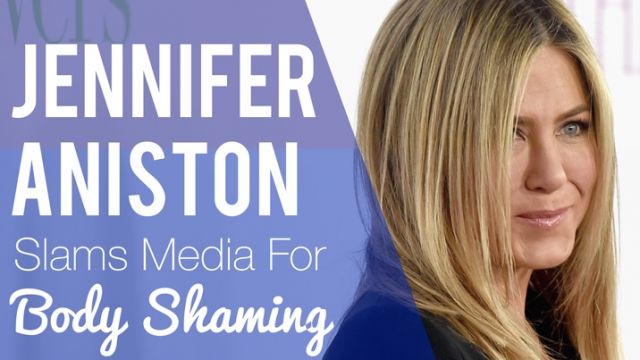 Jennifer Aniston had a message for tabloid media and she didn’t hold back. The actress, who’s been a fast and furious target for gossip and false pregnancy rumors, recently wrote that she’s fed up with the “sport-like” body shaming that happens daily in the tabloids “under the guise of “journalism,” “the First Amendment’’ and “celebrity news.”

For the bajillionth time, she’s not pregnant

Anniston who normally stays clear of social media or commenting on tabloid gossip decided to take tabloid journalism head-on in a recent blog post for the Huffington Post.

“For the record, I am not pregnant,” Aniston wrote. “What I am is fed up.”

“The objectification and scrutiny we put women through is absurd and disturbing,” Aniston wrote. “The way I am portrayed by the media is simply a reflection of how we see and portray women in general, measured against some warped standard of beauty.”

As for being asked continually if she is pregnant, Aniston writes:

“This past month in particular has illuminated for me how much we define a woman’s value based on her marital and maternal status,” she wrote. “The sheer amount of resources being spent right now by press trying to simply uncover whether or not I am pregnant (for the bajillionth time… but who’s counting) points to the perpetuation of this notion that women are somehow incomplete, unsuccessful, or unhappy if they’re not married with children.”

As always, there are critics…

With fame ultimately comes the paparazzi, and alongside the paparazzi comes journalists like Piers Morgan. Although claiming to have “great sympathy with her,” he also criticizes Aniston in Mail Online:

“You may want to dismount from that high horse at this point, Jennifer,” Morgan writes. “The unspoken implication is obvious: ‘You’re looking fatter than usual.’

Morgan goes on to praise Aniston for her grace, charm, warmth, humor and beauty. But, in usual candor, quickly moves on to suggest the real reason famous women are objectified.

“There’s another reason why the media objectify and scrutinize famous women, and why little girls get confused about beauty and body image,” writes Morgan. “It’s this: female stars like Jennifer Aniston deliberately perpetuate the myth of ‘perfection’ by posing for endless magazine covers which have been airbrushed so much that in some cases the celebrity is virtually unrecognizable.”

While Jennifer Aniston’s message is important, eloquent and timely, I have to (but hate to) agree with Piers Morgan. Maybe you just can’t have it both ways. If you want the media to stop objectifying women and sending false messages about beauty to young girls, then perhaps celebrities should stop allowing themselves to be objectified in celebrity photo shoots for the sake of fame and fortune.

Nevertheless, Aniston’s message is loud and clear and serves to remind us that not everything written in tabloids is as it appears. And it’s ultimately up to us — not society — to decide what is beautiful, if we should be married or have a baby.