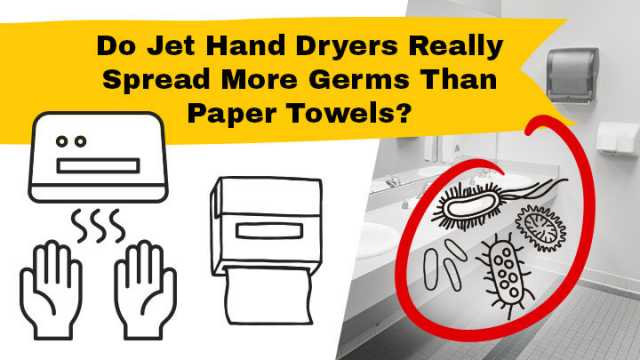 There’s a good reason why some folks avoid public restrooms altogether. Germs are everywhere — toilets, toilet paper, faucets and doorknobs. And now it seems that those same nasty germs could also be blowing into your face.

Most restrooms have them — those fast and furious jet hand dryers. But are they actually more sterile than paper towels? Well, according to research, they could make you and others around you sick.

A study published in the Journal of Applied Microbiology compared three hand-drying methods: paper towels, a warm air dryer and a jet air dryer. Researchers tested them for their potential to scatter viruses and contaminate the immediate environment with each use.

Researchers asked participants to dip their gloved hands into a solution of a harmless virus called MS2. After quickly shaking their hands, participants used one of the three drying methods. Researchers collected samples from the air and surfaces at various distances away from the drying procedure.

In turns out, jet air dryers were significantly the worst offenders. They sprayed 1,300 times more viral plaque than paper towels — sending it nearly 10 feet in circumference from the dryer. 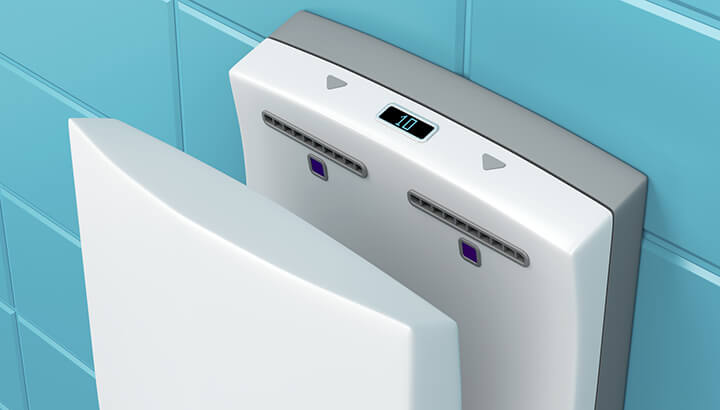 Study researchers suggest different types of hand-drying devices should be carefully considered, particularly in areas where infection prevention is paramount, such as hospitals, health care settings and the food industry.

Unsurprisingly, similar studies conducted by the same researchers stirred controversy back in 2014. Dyson spokespeople noted that participants’ hands were more covered with viruses than they would naturally be in a real-world restroom scenario. They claimed that paper towels are also covered with germs from previous users.

However, in 2005, a German Pulp and Paper Association-commissioned study showed that bacteria on hands decreased by 24 percent when wiped on paper towel.

Dyson hit back. In 2008, the company had the first hand-dryer to be kite-marked by the Royal Society for Public Health. They noted that the Dyson Airblade filters 99.9 percent of bacteria out of the air it ingests. Meanwhile, a Dyson spokesperson accused scientists of “scaremongering.” They complained that the research was being funded by the paper towel industry… yikes!

Germs versus the environment

So, will restrooms switch back to paper towels anytime soon? Probably not. But there’s good reason for that, and it could very well be environmental. There’s no question that hand dryers are far less expensive to operate than paper towels. In fact, it takes more energy to manufacture and even recycle paper towels than it does to operate a hand dryer. And that doesn’t include the price of chopping down trees, transporting the paper towels and the chemicals that go into the paper towel manufacturing process.

Hand dryers also create less waste than paper towels. According to Restroom Direct, one big complaint for many companies is that people flush paper towels down toilets, causing them to be clogged. And when that happens, the cost of having paper towels goes through the roof. And finally, after bagging and trucking them to a dump, valuable landfill space is taken. So, it’s easy to see why hand dryers win out environmentally — hands down.

Some people, on the other hand, want paper towels. The mere thought of touching a door handle when leaving a restroom is gross. You many even want a paper towel to turn off the tap. For very dirty restrooms, this is a legitimate issue. And don’t even think about using toilet paper. It turns out, the toilet paper in dirtier than toilet seats — 150 percent filthier with bacteria, in fact, than toilet seats.

One solution might be for restrooms to keep some towels and a basket next to the bathroom door. However, restrooms without doors — like those you see at the airport — are ideal for us germaphobes.

How to stay germ-free in public bathrooms

Avoid touching any surfaces in a public restroom, especially the floor. That means if you see a roll of toilet paper on the floor, don’t pick it up and certainly don’t use it. And of course, never place your belongings on the floor either. Charles Gerba, a microbiologist at the University of Arizona who studied germs in public restrooms, found that one-third of the women’s purses that were placed on bathroom floors harbored fecal bacteria on the bottom.

Also, beware the flush. If you see someone walking out of a stall, steer clear. The germs from their flush will probably still be in the air. When you’re finished, get fully clothed and ready to exit just before you flush. That way germs in the bowl, from the person who was there before you, can’t reach exposed areas.

And of course, make sure to wash your hands for at least 20 seconds — one round of “Happy Birthday.” In addition, if you use your phone while on the toilet, make sure to disinfect.

Create your own restroom kit 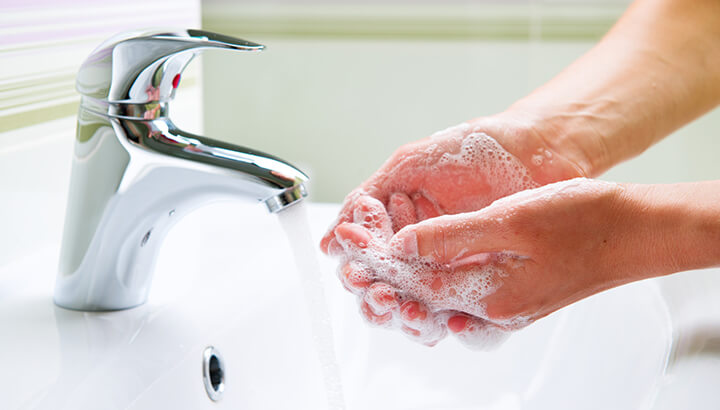 Take into account the many restrooms only use hand jet dryers, so you may want to consider creating your own potty kit. You can carry it in your backpack, purse or pocket. Include surface cleaning wipes, good quality toilet paper or personal wipes, paper towels, soap, hand sanitizer and anything else you regularly use in the restroom.

All things considered, public restrooms won’t kill you. But a little thought to your restroom activity and exit plan could prevent the spread of germs.