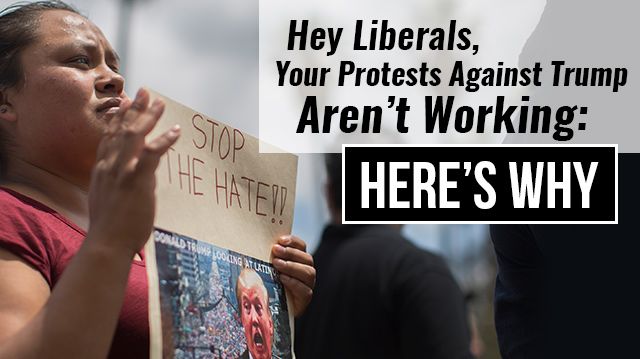 When historians look back on the presidential election of 2016, they’ll surely describe this season as one of anger. It’s understandable for people to be furious, with the way things have been and the way things may go. After all, anger is a big reason we have Trump and Sanders in the race.

Just yesterday, anti-Trump protesters were arrested as violence erupted outside an Albuquerque convention center where the presumptive Republican nominee was speaking. As is often the case, violence isn’t the answer, and here’s why.

It strengthens the opposition

Donald Trump is known for his inflammatory language and his supporters are among the most violent. Slate has compiled a running list of the violent incidents that take place at Trump events and to say it’s troubling is an understatement. Trump supporters have shoved non-violent protesters, and Trump likened them to terrorists. At another event, a protestor was kicked and punched by a 32-year-old Trump supporter, who was later, thankfully, arrested for assault.

In fact, Trump’s own security officials and his campaign manager Corey Lewandowski have been accused of getting physically violent with protesters at various Trump events. Lewandowski even “forcibly” grabbed a right-wing female reporter, “nearly bringing her down to the ground” for asking a question after a Trump press conference this spring.

However, when a group of anti-Trump protesters stoops to this kind of violence, it turns the attention from Trump and his supporters and frames the protestors as bad guys, and rightly so. Destruction of property and assault are crimes.

Violent protests draw the focus from the utterly horrible things that Trump says and turns public attention to the violence outside. It makes him look like the victim, like “they” are trying to silence him for going against the establishment. Trump can spin a story to his advantage like few others, and that hurts both the Sanders and Clinton campaigns.

Protesters broke a glass door at the convention center on Tuesday, threw bottles and rocks at police horses and danced on cars. It was reminiscent of the protests in the streets of Chicago that forced Trump to cancel his appearance in March of this year. But street protests, by and large, don’t work. As Moises Naim of The Atlantic wrote in 2014, protesters often have “no formal affiliation with one another, no clear hierarchy, and no obvious leaders.” There’s nothing accomplished — aside from a release of pent-up emotion — when protests turn violent.

In 2009, Anders Colding-Jorgensen of the University of Copenhagen conducted a study. Colding-Jorgensen created a Facebook group to protest a fake demolition of Stork Fountain in Copenhagen. In the first week, 10,000 people joined the online protest. In two weeks, there were more than 27,000 members — but that was it. There was no actual demonstration. Much like with street protests, the online effort fizzled out. People forgot about it, but the study showed how quickly people’s emotions get out of hand.

Natasha Vargas-Cooper, a former organizer and contributor to The New York Times, wrote recently, “At their worst, protests and demonstrations are self-indulgent acts of personal and collective therapy, public tantrums of self-righteousness.”

Vargas-Cooper continued, “At their best, protests can be an important tactic, but only a tactic, as opposed to an effective strategy.” Change, according to Vargas-Cooper, comes through diligent, long-term, persistent organization. Protests like the one this week in New Mexico are, as she points out, “cringe inducing, even detrimental,” as they are essentially grown-up versions of a toddler’s temper tantrum.

Think about it: What happens when someone starts yelling at you? You either respond in anger or you completely tune out. When the American public witnesses these protests, some people become angry from afar. Other people tune out. If protesters can get their point across in a peaceful, more logical manner, they’re more successful.

Nonviolent protests draw people’s attention to a problem in a real way. Martin Luther King, Jr. wrote the following in his Letter from Birmingham Jail, dated April 16, 1963: “Nonviolent direct actions seek to create such a crisis and foster such a tension that a community which has constantly refused to negotiate is forced to confront the issue. It seeks to so dramatize the issue that it can no longer be ignored.”

Granted, King wrote of the civil rights protests and sit-ins of the 1960s, but his words are applicable to today’s events. Democracy Spring and Democracy Awakening protesters peacefully marched on the nation’s capital this spring and many of them were arrested, not the least of whom were Ben Cohen and Jerry Greenfield, founders of Ben & Jerry’s ice cream. But the peaceful protests of the 300 arrested along with the dairy-dessert giants brought attention to their cause. They weren’t viewed as crazy, out-of-control hellions assaulting cops and destroying property.

Instead, these protesters inspired outrage on their behalf. They were protesting peacefully, so why were they arrested? People began to question whether or not protesters’ Constitutional rights were violated. Onlookers debated the right to free assembly. In contrast, the protesters in New Mexico this week are viewed by the general public as not worthy of more than a passing glance in an online news feed.

The general public appreciates civil rights. Protests that focus on the violation of our basic civil and human rights are far more effective than riotous outbreaks that anti-Trump protesters seem to keep falling into this year. As humanist Tom Buczkowski writes, there are many ways to bring about social change, including “public awareness, education through public discourse and debate, and legislation or changes to existing laws pertinent to the issue.”

In short, social change doesn’t come through quick, eruptive action, but through the slow, steady, persistent exposure to an issue.

That’s the scary part. Trump has been slowly stirring the pot, inciting anger and hatred over months of time. It looks like that anger has overflowed to liberals and anti-Trump individuals, poisoning the general public to a greater degree and in a way that’s far more dangerous than a few hundred protesters throwing rocks at cops.