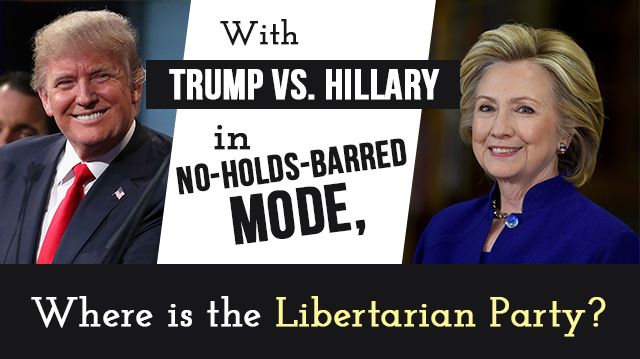 Some weeks back, amidst the height of Bernie vs. Hillary and shouts of “Little Marco” and “Lyin’ Ted,” the TV journalist John Stossel moderated the Libertarian Party debate. Broadcast on the Fox Business channel, the debate included the party’s frontrunner, Gary Johnson, as well as software entrepreneur John McAfee and blogger Austin Petersen. The party’s first nationally televised debate brought a refreshing and somewhat contrasting perspective to an otherwise wacky election.

The tone of the debate was lighthearted, with Gary Johnson even kissing John McAfee on the cheek at one point. While the candidates seemed clear that their debate was more a statement and less a legitimate threat to Clinton and Trump, their answers seemed so rooted in common sense and liberty, a founding principle that unites most Americans, that the question arose: Where has the Libertarian Party gone?

It has been around since 1971. If you ask most Americans their thoughts on the Libertarian Party, you’ll either get a “What do they believe again?” or “I just know that Ron Paul is part of it.” With the Texas Congressman out of the picture and his son Rand out of the GOP running, it’s hard for many to believe that the Libertarian Party is in fact the third-largest political party in the United States. Being third in a two-party race, of course, is not particularly meaningful.

Yet this two-party system is not actually based on anything in the Constitution. In fact, “no party” is more like it. The Founding Fathers were weary of “factionalism,” mindful of the potential for corruption, and they did not see political candidates with allegiance to certain groups having any sort of place. However, during the election of 1796, when statesmen John Adams and Thomas Jefferson began to disagree on key issues relating to the economy, two sides began to emerge. The full history behind our two-party system is a deep topic and the characterizations of both sides has changed over time, but the idea of having political “parties” stuck and is effectively how our political system runs today.

What’s more, the present-day prevalence of winner-take-all states hurts any third party’s possibility of taking significant electoral votes away from either a Democrat or a Republican. Since Libertarian voters are often drawn by the fiscal conservatism of the GOP, the opportunity cost of their vote is typically a lost vote for a Republican.

But what if a Libertarian candidate were a real possibility? This year, Gary Johnson, former governor of New Mexico and the leading candidate, presents some compelling stances. He takes serious issue with our national debt while committing to maintaining personal freedom. He also supports ending the war on drugs and simplifying the immigration process to make it easier for people to come to the United States lawfully. A recent poll showed 11% of all Americans would vote for Johnson.

Even with one in 10 voters behind him, it’s clear that the media does not afford the Libertarian party adequate coverage. Especially in an election with such headline-worthy antics, it’s hard for any voter to realize that there even is another option besides what we’re constantly forced to digest. Everywhere you turn, there is another picture, or another article about Trump and Clinton.

According to Johnson, the key to getting more Libertarian voters is more attention. “There’s no way that a third party wins without being in the presidential debates,” he maintains. He likely is referring to the main debates on the broadcast news stations and not a less-watched cable station such as Fox Business, one a good portion of Americans don’t even have on their cable subscription.

It would really be a great step in the right direction to include the leading Libertarian candidate in the upcoming debates to show Americans that there are more choices. Since Trump and Clinton are polarizing political figures, many independents and undecided voters are currently wringing their hands and attempting to choose the “lesser of two evils.” If a Libertarian were included, such voters may tune in expecting to see Trump and Clinton go at each other’s’ throats, only to be pleasantly surprised by the Libertarian party’s rich ideas.

Just consider how much Sen. Bernie Sanders (I-Vt.) has been able to shake things up during this election cycle, whether you agree with his politics or not. Emerging seemingly out of left field and gaining traction quickly, Sanders shocked many who didn’t believe he would progress nearly as much as he has. He continues to give Clinton a run for her money.

These grassroots efforts are not in vain, even if Trump or Clinton takes the White House, as we imagine one of them will. An 11% piece of the pot as a Libertarian should get some attention and remind Americans that the party is still here, even amongst the madness of this year’s presidential race. Political movements do send a message, especially when we are starved for an alternative to what’s going on right now.

As Johnson says, “I think the vast majority of Americans are libertarian [but] they just don’t know it.” What might happen if, through seeing a Libertarian included in the debate, Americans figured that out?