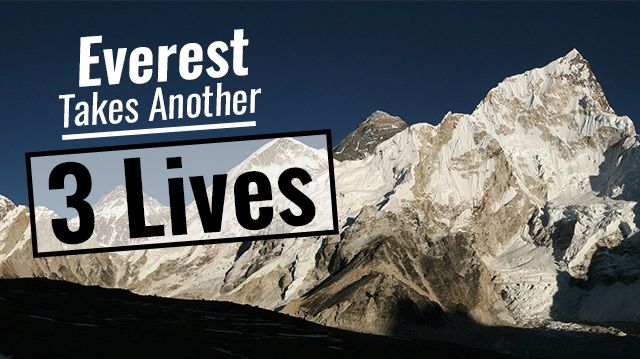 Why would someone risk their life to scale a mountain? For hardcore climbers, Everest is the ultimate high, but with triumph also comes tragedy. No one understands that more than the families of climbers who die every year on the treacherous mountainside.

Retired Staff Sgt. Chad Jukes, 2nd Lt. Harold Earls and Capt. Elyse Ping Medvigy today reached the peak of Mount Everest and achieved their goal — to shed light on the daily battle veterans experience living with post-traumatic stress disorder, including constant thoughts of suicide. They were the first group of active-duty and combat-wounded service members to make the summit.

Yet just last Saturday Everest claimed the life of an Australian woman who wanted to prove that “vegans can do anything.” Dr. Maria Strydom, 34, died after developing altitude sickness on the way down to Camp 3, according to Pasang Phurba Sherpa, a director at Seven Summit Treks.

Two others died on Everest, including 35-year-old Dutch mountaineer Eric Arnold, who was in the same climbing party as Strydom. He suffered altitude sickness and died at Camp 4 late Friday. On the day he died, Arnold had posted a picture to his Twitter account saying he had summitted the 8,850-meter peak on his fifth attempt. Last year, Arnold survived a deadly avalanche at Everest base camp following a massive earthquake.

On Monday, Subhash Paul of India was reported as the third death after succumbing to altitude sickness. Meanwhile, two other Indian climbers, Paresh Nath and Goutam Ghosh, have been missing since Saturday. “It’s unlikely they would be able to survive Everest’s hostile conditions,” according to Wangchu Sherpa.

Standing 29,035 feet, an altitude typical of jet airliner traffic, Mount Everest can claim its victims in a number of ways: by avalanche, tumbling down a crevasse or, most often, through altitude sickness, as was the case with its three most recent victims. Since 1953, more than 250 people have died trying to reach the summit. But the most dangerous part of climbing Mount Everest is not climbing up — it’s trying to get back down. All three of the latest deaths occurred on the descent.

Many believe that climbers who die scaling Mount Everest lack the experience needed to navigate the mountain’s treacherous topography. It might be simpler than that. A study conducted in 2008 by an international research team and published in Science Daily concluded that most deaths on Mount Everest happen above 8,000 meters, and during the descent into an area known as the “death zone.”

Strydom had reached the final camp below the summit before she and her husband, Robert Gropel, began suffering from high-altitude pulmonary edema, a condition which caused fluid to build up in Strydom’s brain. Her husband survived the descent and was taken to a Nepal hospital for treatment, according to The Sydney Morning Herald.

“Physically he’s OK, we think. Mentally he is a mess. He’s just lost his wife. These guys were not amateurs, they were experienced climbers,” said Heinz Gropel, Robert’s father.

Fortunately for Strydom’s family, her body is being brought down from the mountain to be transferred to Kathmandu within days. The grim reality for many who have lost someone to Everest is that their loved one’s body is never recovered. Because of the expense, logistical difficulty and danger in recovering a body, many of the hikers who perishe while trying to reach the summit remain frozen in place on the corpse-strewn mountain.

Since 1953, when Edmund Hillary and Tenzing Norgay first reached the summit of Mount Everest, about 280 people have died — and the death toll rises — at times daily, thanks in part to inexperienced climbers, poor equipment and security risks, says Nepal Mountaineering Association Chief Ang Tshering Sherpa.

Hiking officials blame the government, which they say charges $11,000 for each Everest permit and then fails to spend money on safety measures. This year the Nepal government collected $3.1 million in permit fees from 289 climbers.

“The deaths were not due to accident or the crowd,” says Sudarshan Dhakal, an official with the Nepal tourism ministry. “Energy loss and altitude sickness mean that they were not well prepared.”

In addition to the three recent deaths, a fourth person died in the past week for simply doing his job. Phurba Sherpa, 25, plunged to his death Thursday while attempting to secure a route for future climbers about 500 feet under the summit, according to CNN.

While climbing Mount Everest may not be for the faint of heart, it’s also not a poor man’s sport. The price for a standard climb is between $30,000 and $85,000. Even so, that doesn’t stop approximately 500 people a year from attempting the climb. Everest is a climber’s dream. To reach the top means to stand on top of the world, knowing you can conquer anything.

Is the thrill worth the risk of death? The New York Times once asked British mountaineer George Mallory, who died on the mountain during his third expedition in 1924, why he climbs Everest. He famously answered, “Because it’s there.”