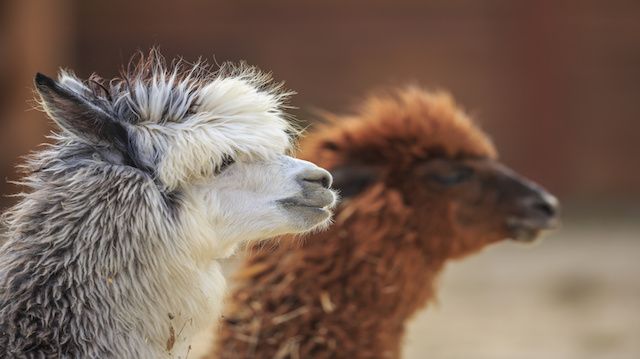 Llamas and alpacas were touted as “sure-fire” investments not that long ago. The investment bubble has burst, but now the price for these camelids is no longer stratospheric — many are available from rescues. They can be acquired as pets or for the purposes for which they were bred.

Differences between llamas and alpacas

Although there are superficial similarities, llamas and alpacas are quite distinct from each other. Llamas are far larger than their alpaca cousins, maturing at about 400 pounds compared to the alpaca’s 150 pounds. A full-grown llama stands between 42 and 46 inches tall at the shoulder, while the alpaca is only 34 to 36 inches high at maturity. Alpacas are the smallest of all camelids. Other differences include:

The two species also differ in disposition. If you’re primarily interested in a pet, the llama is your best bet. Llamas are much calmer and friendlier than alpacas. Since these are herd animals, it’s advisable to have at least two of them. That’s especially true of alpacas; however, other hooved animals can serve as companions for llamas.

While it is possible for alpacas and llamas to mate with each other and produce offspring, allowing them to breed isn’t advisable. The resulting progeny will not possess the lovely fleece of the alpaca or the pack animal strength of the llama.

Llamas and alpacas thrive on good-quality pasture, grass and/or timothy hay. Pregnant or newly weaned animals may need some supplementary alfalfa. Your stock should always have fresh, clean water available. Provide a three-sided run-in shed for your herd or allow them access to a barn at night. Llamas and alpacas don’t usually challenge fencing. To keep them inside a pasture and predators out, use woven wire fencing designed for horses.

One important caveat: Llamas and alpacas breed year round. Unless you are planning to breed your animals, keep males and females separate at all times.

Unlike horses or goats, many llamas and alpacas won’t need their feet trimmed more than once or twice a year, although there are exceptions. Animals kept in an environment where there is less opportunity for their nails to wear down naturally will require trimming every three months or so. Trim the nail so that it is flush with the bottom of the footpad. Llamas and alpacas don’t normally require regular teeth floating or trimming. However, a male’s “fighting teeth” should be extracted when he’s about 2.5 years old, which is also a good time for castration. The vet can perform both surgeries at the same time.

If you like hiking or trekking in the wilderness, a llama makes an ideal pack animal. That’s what they are used for in the Andes Mountains, and a typical llama can carry up to one-third of its body weight over difficult terrain.

If you keep sheep, goats, cows or other livestock vulnerable to predators, consider acquiring a llama to protect your herd. Llamas will also protect alpacas — and even poultry. In nature, the dominant male llama guards his females against all threats. For practical purposes, an older, gelded male llama makes the best guard animal, although an older female can fit the bill. A guard llama will spit at a potential predator and maneuver his herd away from the threat. He then strikes at the predator or chases it away from the flock. 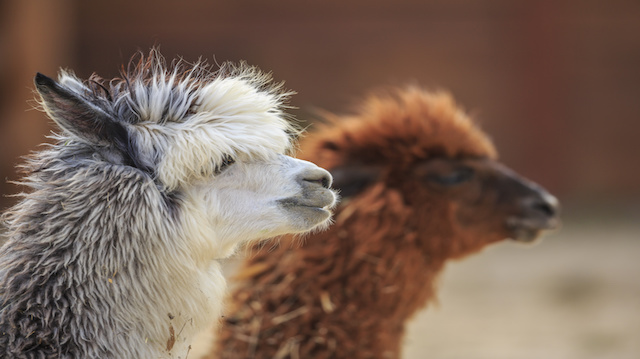 Alpacas aren’t large enough to use as pack animals, and they aren’t suitable guard animals. However, if you like to spin, consider the alpaca. Their fleece is luxurious and soft, similar to cashmere. In their native South America, alpacas have been bred for fiber production for 5,000 years, and their fleece appears in a variety of colors. Since the fleece contains no lanolin, it’s considered hypoallergenic.

Shear your alpaca and harvest the fleece annually, before the summer’s heat. Heat stress is an issue for both alpacas and llamas. Although llama hair is coarse and not especially valuable as a fiber, a llama may also require shearing prior to hot weather.

The many valuable roles these camelids can fill make them a useful and enjoyable creature. Consider llamas as pack animals or livestock guardians. Enjoy your alpaca’s fleece or your llama’s friendly disposition. With minimal care, these camelids can make a great addition to your creature family.