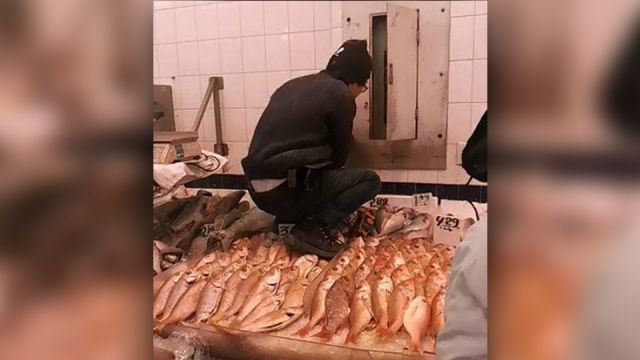 After footage of a worker walking all over fish for sale went viral earlier this week, many people are asking questions about the hygiene standards behind the fish that make it on to our plate.

The video was shot by customer Apri Davidson at the Hung Kee Food Market in New York. “Seriously?” she asked in the video posted to Facebook on Wednesday, “You’re gonna stand there on the food, with your boots?”

The man, who was trying to repair a broken fuse box over the fish stand, responded that they would wash the fish. However, a state food inspector eventually went to the market and found “critical deficiencies,” according to the New York State Department of Agriculture and Markets.

Hygiene violations are more common than you think

Hygiene violations don’t always occur where you might expect; one of the biggest cases covered by the media last year was at President Trump’s Mar-a-Lago club, where restaurant inspectors found that diners were being offered “potentially parasitic raw fish” and meat was stored in broken coolers at too-high temperatures. While some fish have approval for being served raw, the fish in this case weren’t exempt, and hadn’t undergone “proper parasite destruction.”

Also, early last year, Alabama-based Safe Harbour Seafood was given a warning by the FDA for not effectively controlling Scombrotoxin formation and sulfates in its seafood. Companies should monitor the time of death of the fish, the time of off-loading and whether ice was used since death to keep the fish’s internal temperature at a suitable level. Apparently, the company wasn’t following any of those precautions.

Serious fish hygiene problems you should know about

While dirt from a person’s boot getting all over the fish is definitely alarming, there are more common and serious incidents of health violations that are worth being aware of:

This is used for those fish where consumers see a red coloring as an indicator of quality. The treatment can make fish look better, and tilapia is a prime fish for this sort of treatment. The amount of gas used is very small though, and doesn’t directly pose any health risks. The key risk is actually that it can make it hard to judge the quality of the fish. This treatment has been banned in Europe, Japan, Singapore and Canada, but not yet in the U.S.

2. The use of formalin solution

Some fish handlers use this for preservation and for killing fish parasites. However, formalin is poisonous and such fish shouldn’t be consumed, according to the World Health Organization. The FDA, however, has approved the use of formalin in aquaculture.

Vibrio cholera, Salmonella, E. coli, Shigella and Listeria are all possible pathogens resulting from poor hygiene during the production process, and they can lead to illnesses and infections. Vibrio cholera causes cholera and is a serious and global issue. It can be transmitted through fish and shellfish. Cases are rare in the U.S., but the best prevention is to avoid eating raw or under-cooked seafood. Salmonella outbreaks are also linked to consumption of raw fish, as is food poisoning from E. coli. While some strains of E. coli are safe, there are four strains that can cause health issues such as diarrhea. Some 173,000 foodborne cases of E. coli occur annually in the United States.

This is a result of industrial mercury dumped in fish environments, and is also naturally occurring in some fish. Small amounts of methyl mercury are safe; the danger is in consuming large amounts of fish regularly. Fish to consume less (once a month) include lake trout and walleye, while catfish and Atlantic and Pacific salmon have lower levels of mercury and can be safely consumed, including by pregnant women, twice a week. High mercury exposure can lead to a loss of peripheral vision, impaired speech and muscle weakness. The U.S. is leading the way with mercury regulation, with the Clean Air Act aimed at controlling the amount of mercury released into the air, which eventually dissolves in ocean water.

An estimated 90 perent of the fish consumed in the U.S. comes from abroad, and the FDA inspects one to two percent of that fish. It has rejected a range of shipments, usually for mislabeling, decomposition, pesticide residues and pathogens, but the rejection rate is low, at 0.33 percent of all inspections. While it would be difficult, at a practical level, to inspect more fish, with required paperwork for imports also playing a role in preventing problems, food safety groups are still concerned about how easy it is for adulterated food to get in.

What kind of seafood do you eat? Let us know in the comments below!