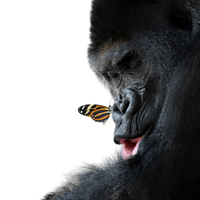 In a recent report outlining the health of primates throughout the world, it was revealed that primates are in more danger today than ever in history. In addition, with the introduction of GMO modified corn into the agricultural system, pesticide use is impacting the survival of many species of butterflies, bees and other animals.

In Africa and Asia, primates are threatened because of multiple human activities. Apes, monkeys and lemurs are in danger because of destruction of habitat. According to a report from the International Union for the Conversation of Nature, more than half of known primates are in danger. In many cases, these primates are located in regions with political unrest. As a result, protective environmental policies are not enacted or enforced.

An additional factor for many threatened species is habitat destruction. In many economically growing areas of the world, clearing and burning of forested areas destroys plants and homes needed by animals for survival. Habitat destruction is also used by poachers to drive out animals for illegal hunting of primates for the wildlife trade.

Pesticides Destroying Butterflies and Others

Although some humans play a positive, healthy role in the sustainability of wildlife, the other side of the coin presents a very dangerous threat to our plant and animal kingdom. Since the early 2000s, pesticides have been introduced that have a substantial impact on insects. Although the goal of using pesticides is often to rid farms of unwanted insects, any insects along the way are also destroyed. With the introduction of GMO corn seed, large chemical companies have impacted many species of needed insects.

Monarch butterfly numbers have decreased in recent years as a result of GMO corn. Farmers spray their crops with Roundup, a pesticide manufactured by Monsanto. GMO corn is designed to be tolerant of stronger pesticides such as Roundup. Unfortunately, one of the weeds that is destroyed with the use of pesticides is milkweed, which is necessary for Monarch butterflies to reproduce and flourish. As the milkweed has disappeared, so have the butterflies.

Although humans are part of the Earth, the impact of our actions is important to consider. Primates are important for the environment because they assist with distributing seeds throughout their forest habitat, helping keep the air clean and healthy. Butterflies and other insects are important because they help pollinate plants, contributing to the food supply. By supporting organic and healthy, conscious approaches to the environment we are not only supporting the survival of the Earth, we are also supporting human survival. Remember, we share this planet.