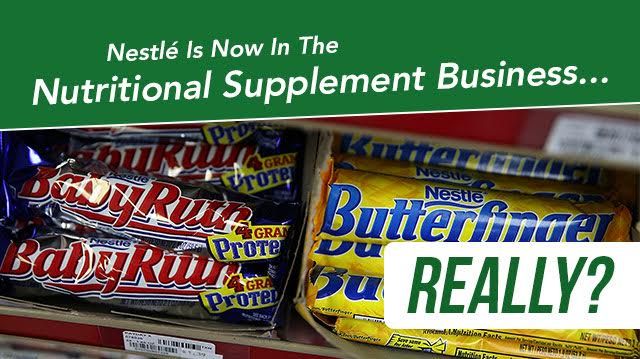 Responding to the highly encouraging trend of consumers demanding healthier food choices and transparency of ingredients, many big food corporations are taking steps towards removing certain unsavory additives (such as artificial colorings and GMOs) from their products.

These are baby steps, as we know that processed foods are still not healthy by their very nature, and removing the artificial colorings won’t make them nutritious. Still, it’s a start. The pressure the public has put on these companies is slowly bearing fruit.

One of these food giants is Nestlé, the largest food company in the world, and worth more than $247 billion as of May 2015. Nestlé decided to end its use of artificial colors and flavors in order to appeal to the increasingly health-conscious mindset of the American people.

However, according to a recent report by Bloomberg Businessweek, Nestlé has also decided to capitalize on the health trend in a different way: by reshaping itself as a “nutrition, health, and wellness company.”

Nestlé has plans to research, manufacture and market nutritional supplements and remedies. While, of course, still peddling candy, chocolate milk mix, and thousands of other processed foods.

Oh, the irony. Nestlé, the largest maker of sugary, processed snacks in the world, now wants to make us healthy? My head is spinning at the very thought.

Basically, Nestlé wants to create products based on food ingredients that will be tailored to a variety of ailments, including digestive issues, diabetes, cognitive decline, and obesity. Protein and vitamin supplements are also on the list. Some of these products would be marketed over the counter, while others would require a physician’s prescription.

The Nestlé Institute of Health Sciences is run by Dr. Emmanuel E. Baetge, who has over 160 scientists in a variety of fields performing research under his direction. According to Baetge, delivering medication in food form could be an effective and new way to prevent and treat disease. He stated that this idea, “really turns the pharmaceutical model on its head. How do we activate the biggest drug that we take every day?”

It’s funny that Baetge refers to food as a drug. It’s not a stretch to say that processed food is indeed drug-like in nature. It’s addictive, and can be quite harmful, especially over a long period of time. Nestlé knows a great deal about using food as a drug; the company sells mass quantities of processed, sugary food every day.

While work at the Nestlé Institute of Health Sciences is still in the research stages, the Nestlé Health Science division already has various brands under its name. These brands distribute dozens of health products that are already in existence. These include the high-protein beverage Resource Support Plus; Meritene Energis, a drink mix for muscle function and fatigue; and Optifast, a line of foods and snacks for obese individuals, designed to be “taken under supervision of a doctor.”

It’s simply appalling to me that we live in a world where a company can make billions of dollars selling foods that contribute to obesity, and then turn around and design products to help combat obesity, which will likely net billions of dollars for the company. As Leith Greenslade, head of the organization Just Actions, commented, Nestlé is:

Indeed, this may be one of the most egregious examples of a conflict of interest that I’ve ever encountered.