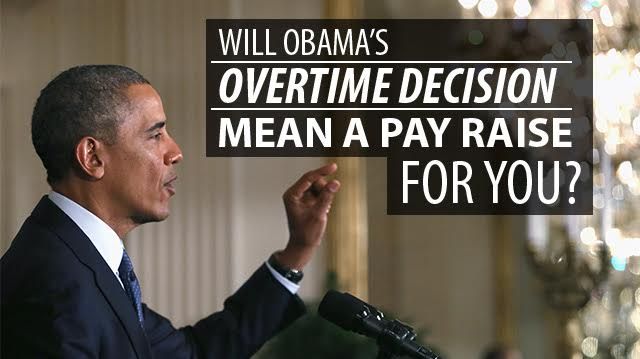 It looks like millions of American workers will become eligible for overtime pay later this year, thanks to an executive order from President Obama. Will you be one of the millions to reap the rewards?

According to the Overtime Rule announced this past week, anyone who makes less than $47,476 annually, or $913 a week, automatically qualifies for overtime pay when they put in more than 40 hours of work. The current threshold is $23,660, or $455 a week. The new order thus significantly changes things for many salaried workers who put in OT but see no bump in pay.

For example: Under the old rules, a store assistant manager paid $34,000 a year wouldn’t be eligible for overtime because she’s salaried and makes more than that $23,660 threshold. That assistant manager could be required to put in 60 hours of work a week, write schedules for other employees and manage the store alone frequently, but because she makes more than the $23,660 a year she gets no overtime for hauling butt. Now, with Obama’s order, she would get paid overtime — typically the hourly rate times 1.5 — for those extra hours.

Under the current overtime system, managers have taken advantage of workers for many years, getting sometimes double the work out of one person who, because they’re salaried, don’t get paid more for doing more. Of course, some employers have criticized the order — which goes into effect December 1 — as drastic. Why wouldn’t they oppose it? They’ll have to start paying people what their work is worth, not what they can get away with paying.

Vice President Joe Biden said the changes are part of “restoring and expanding access to the middle class,” and he’s right. Since 1975, the percentage of salaried workers who are automatically eligible for overtime has fallen from 62 percent to a measly 7 percent. This new order means that 35 percent of salaried workers today become eligible for overtime, hardly extreme. To put it another way, 4.2 million people will benefit from the Overtime Rule, and that’s great news for the middle class.

Even better, the order requires that the threshold for overtime work be updated every three years to keep up with rising full-time salaries. The Overtime Rule also strengthens protections for salaried workers and provide greater clarity to both business owners and workers.

There are two likely outcomes to this order: businesses will allow employees to continue working and pay them the overtime they rightly earn, or employers will limit hours to 40 per week and hire temporary staff during seasonal surges. Either way, it’s good news. If an employee is limited to only 40 hours a week, he or she isn’t working long hours for the same pay any more. Hopefully, business owners will recognize that skilled and experienced workers are worth paying to keep.

In fact, the Department of Labor outlines these possibilities on its website. In a large graphic titled “In response to the new overtime rule, employers can” the DOL lists out four possibilities for compliance:

· “Pay time-and-a-half for overtime work.”
· “Raise workers’ salaries above the new threshold.”
· “Limit workers’ hours to 40 per week.”
· “Some combination of the above.”

We’ll just have to see how things shape up starting in December to understand the full impact of this long-overdue change.

Will you be affected by the Overtime Rule?