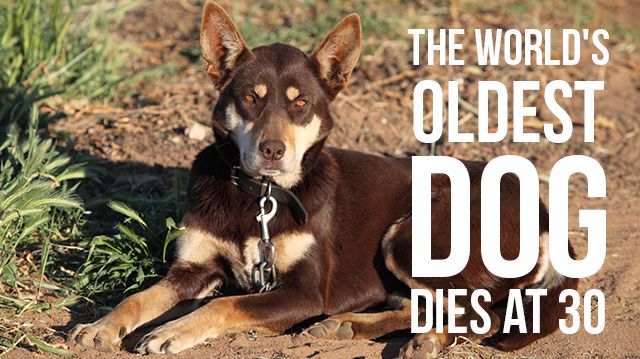 Maggie lived on a dairy farm in Victoria, Australia. Her owner, Brian McLaren, is quoted in USA Today as saying she was still “walking from the dairy to the office and growling at the cats” as of last week, but went downhill over the past few days and died in her bed.

McLaren didn’t have Maggie’s original paperwork, so her age isn’t officially recognized. McLaren says he got her when his son, now 34, was a four-year-old boy. Maggie was laid to rest on the family farm under a pine tree.

Since Maggie’s actual birth date is uncertain, the official title of the world’s oldest dog at the time of death is still held by Bluey, who also resided Down Under. Bluey is listed in the Guinness Book Of World Records with a 1910 birth year. He died at age 29 in 1939. The Australian cattle dog spent his life herding cattle and sheep until the infirmities of old age forced his owner to have him euthanized in November 1939.

On average, Australian kelpies live between 10 and 13 years, which is also about average for dogs their size. They are a herding breed created by crossing collies and other herding types. It’s possible there’s some dingo blood in the mix. Dingos are Australia’s wild dogs, who likely originated in Southeast Asia.

Kelpies are very smart and love to work. They definitely need some kind of a job, and Maggie had one on the dairy farm: herding cows for many years until she slowed down to a supervisory capacity.

As the saying goes, there’s only one thing wrong with dogs: They don’t live long enough. Losing a beloved pet is always tough, but odds are you’ll have more time with certain breeds. Generally, small dogs live longer than large ones. The longest living breeds include:

On the other end of the spectrum are breeds with an unusually short life span. While the average dog is middle-aged at 10, many of these breeds never reach that age. Dogs with short life spans include:

Although genetics play a major role in life span, there are ways to keep your pet around as long as possible. Feed him a healthy diet free of by-products. Make sure your dog receives plenty of exercise. Take him to the vet for regular check-ups, and ensure he is on a good parasite-control program for fleas, ticks and heartworm. Train your dog — a dog that is well-trained and knows to come when called is less likely to get hit by a car or suffer another type of accident. Give him plenty of attention, love and affection. In the end, it’s the quality of his life that really counts.