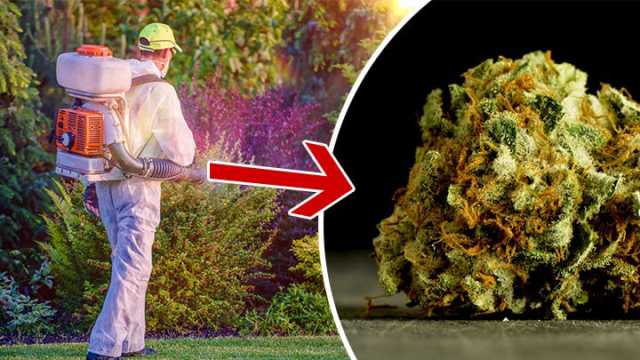 The buzz about medical marijuana continues to grow. A record number of states now allow patients to use pot for health-related purposes and a prestigious NIH study recently called on the federal government to reclassify cannabis to allow scientists to research its analgesic, anti-inflammatory and antispasmodic properties.

Unfortunately, a new threat to therapeutic weed has emerged — and it’s not Attorney General Jeff Sessions, Donald Trump or the DEA. Rather, it’s pesticide-contaminated pot, which is turning up in weed dispensaries across the country. Is your stash safe? And what can be done to make sure that medical marijuana patients and recreational consumers don’t end up ingesting contaminated cannabis?

Contaminated cannabis is a growing problem

Medical marijuana has been on a roll. For example, recently a meta-study, jointly funded by the government and private scientific institution, concluded definitively that cannabis is medicine. Even Donald Trump now says that he supports the medicinal use of pot “a 100 percent.” News stories and scientific studies supporting the health benefits of weed seem to crop up nearly every day.

Amidst all these positive developments, however, some sobering news has hit the headlines. Apparently, medical marijuana contaminated by a fungus is believed to be responsible for killing at least one cancer patient. In addition, reports of potentially hazardous pesticide residue turning up in weed supplies have many consumers and health advocates alarmed.

Jmichaele Keller, CEO of the cannabis-testing firm Steep Hill, captures these concerns well by saying, “Those in the cannabis community who feel that all cannabis is safe are not correct given this data. Smoking a joint of pesticide-contaminated cannabis could potentially expose the body to lethal chemicals.”

How extensive is the problem?

Well, according to testing done at the Steep Hill lab, 84 percent of the medical marijuana available in California contains significant amounts of pesticides.

In fact, pesticide residue on pot is potentially very hazardous. That’s because chemicals like Myclobutanil, which is a fungicide used on many edible fruits and vegetables, actually turns into hydrogen cyanide when heated. That’s the same chemical used in Zyklon B, the infamous gas the Nazis used in their extermination camps.

According to Don Land, a UC chemistry professor, “hydrogen cyanide is very toxic” and someone could “immediately become ill” after smoking or vaping even low doses from pesticide-contaminated pot.

Indeed, that is likely what happened to Todd Gullion, a medical marijuana patient in California who was vaping cannabis oil to treat back pain. Vaporizers are an increasingly popular way of consuming marijuana. Like e-cigarettes, they work by using disposable cartridges filled with a cannabis-based liquid, which is heated in a pen-like device so that user can inhale marijuana vapor without combusting the plant material. Gullion used vape oil cartridges made by a company called Bhang, which advertises their products as pesticide-free.

Gullion thought vaping marijuana would be safer than smoking it or taking traditional pharmaceuticals. Instead, he ended up in the emergency room. As he described his experience at the time, “My hands go numb, my arms go numb, my feet go numb. I feel like I was poisoned.” Gullion’s vape oil cartridges tested positive for multiple pesticides including Myclobutanil. Indeed, they had 355 times the levels of Myclobutanil that some states permit.

Toxicologists agree pesticides on pot are a serious health risk. As former USC chemistry professor Jeff Raber says, smoking or vaping contaminated weed is “really like injecting that pesticide right into your bloodstream. It could cause damage to your kidneys, to your liver, or other organs,”

Does your pot contain pesticides?

Are there toxic pesticides lurking in your cannabis? That may depend on where you live and also how you score your weed. States like Massachusetts ban the use of non-organic pesticides on marijuana altogether. Other states, most notably, Oregon, Nevada and Washington, enforce strict limits on the levels of pesticide residues that are allowable in pot available for retail purchase.

On the other hand, both Colorado and California have been plagued by reports of pesticide-contaminated cannabis. Recognizing this problem, California expects to have safety standards governing pesticides in pot in place by 2018. According to Lori Ajax, Chief of California’s Bureau of Medical Cannabis Regulation, starting sometime next year, “All cannabis will need to be tested before it is passed on to the dispensary to be sold.”

Because marijuana is prohibited by federal law, there are no FDA-type safety regulations protecting cannabis consumers nationwide. Consequently, it’s up to states where medical and recreational use has been legalized to pass consumer protection laws banning or limiting pesticide levels in pot. As more states reform their cannabis laws, consumers will need to keep the heat on their elected state representatives to make sure regulators craft standards that keep non-organic pesticides out of pot.

Presumably, marijuana purchased at dispensaries or legitimate retail stores should be safer than street pot purchased on the black market. However, until Congress ends the federal prohibition on marijuana, consumers will not have the benefit of FDA regulations, which could better protect the public. Once again, pressure on political leaders on Washington to legalize and regulate weed would go a long way to keep cannabis products as safe as possible.

What can you do to keep safe?

In the interim, there are four steps you can take to minimize the dangers associated with pesticide-laden pot. First, scientists are most concerned about the hazards of smoking pesticides. By cooking with cannabis — instead of vaping or smoking — your body will filter out most of the toxins.

Second, you can also send your pot to a cannabis testing lab. This will alert you to the presence of potentially toxic residues. Thirdly, according to toxicologist Dr. Jeff Raber, a bong that uses water chambers and cotton filters can significantly eliminate the amount of amount of pesticide that ends up in the smoke inhaled. Finally, if you live in a state where pot is legal, you may want to consider growing your own. Organically grown cannabis is the best way to derive the plant’s health benefits.

Pesticides on pot are proving to be something of a buzzkill. However, being mindful of the risks can help you avoid them.