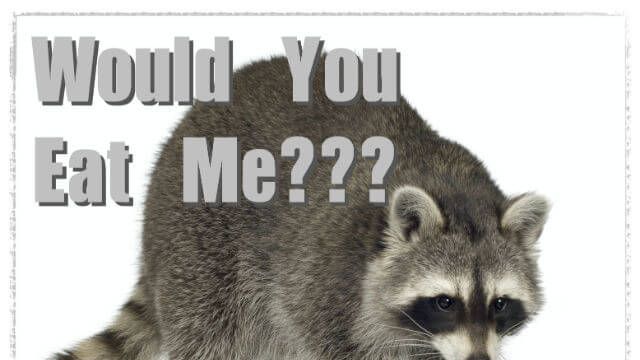 Would you eat brain burgers, or aged cheese loaded with wriggling maggots? What about fried tarantulas or even ant larvae? While some people find these things to be a delicacy, they may be just enough to make your stomach turn.

Although a peek in your favorite supermarket’s fresh and frozen food section may not reveal poisonous puffer fish or live baby octopi, you might be surprised at what one shopper found in a popular Los Angeles Asian supermarket.

Social media is abuzz with a recent video taken by the customer. The phone video shows raccoons, fur and all, frozen inside plastic bags. The shopper came across these icy little mammals in a store freezer. She was so shocked at what she saw that she just had to share it.

What offended the customer the most was the fact that the raccoons were completely intact with bloody fur – frozen with looks of terror on their faces and sealed inside transparent plastic bags. Now that the video is out – people are talking.

You can watch the video over at the L.A. Times by clicking here.

Although the health department has taken the raccoons out of the market, store representatives state that there is nothing wrong with selling these little creatures, and added that they have been doing it for years. The supermarket, which also sells organic produce, notes that raccoon is a very popular ingredient in many dishes.

The “Other Dark Meat”

You might be surprised to know that raccoon meat made it into the first edition of The Joy of Cooking in 1931. Aficionados state that although it is rather labor-intensive to prepare, it is worth the time. Known endearingly to some as the “other dark meat,” raccoon is some of the healthiest meat you can eat, according to furbearer resource biologist Jeff Beringer.

While you may not see fresh or frozen whole raccoon in your local supermarket, the meat is sold in various places throughout the United States. We found out that a whole raccoon goes for about 3 to 7 dollars in several states, and that just one raccoon will feed five adults. This makes it a pretty cost-effective meal, to say the least.

We dug up plenty of evidence that people consume raccoons with regularity here in the United States, mainly in places such as Missouri, Kansas, West Virginia, and Georgia. Many people trap or shoot the coons themselves and feed their families on the meat.

Some might even argue that this meat is healthier than things like french fries, made with silly putty ingredients, or industrially farmed beef. This article and slideshow from Serious Eats even explains in detail how to skin and prepare raccoon – in case you are interested. Yummy?

According to those who have grown up on the meat, it is really good when it is smothered in barbeque sauce and stewed with onions, carrots, celery, and potatoes.

Do you know where your meat comes from?

Even if you don’t eat raccoon, it is still paramount that you know where your meat comes from. If you are one of the millions of Americans that shop for what’s on sale rather than what’s of quality, there’s a good chance your steak or pork chops came from an animal raised in a CAFO, or confined animal feeding operation. These massive farm operations crowd thousands of animals in cramped quarters and are devastating the environment, the quality of our food, and our health.

Just like children in a classroom, when animals are kept crammed in close quarters, disease often runs rampant. In order to keep bacteria at bay, animals are often treated with high doses of antibiotics regardless of whether they’re sick or not. This leads to the emergence of super-strains of salmonella, E. coli, and staphylococcus aureus, otherwise known as MRSA. And yes, these are the same strains that affect humans.

Aside from massive doses of antibiotics, CAFO animals are also treated with a healthy dose of hormones and other drugs that promote rapid growth. In fact, a whopping 70 percent of all antibiotics and related drugs produced in the U.S. are administered to animals used for food production. So, every time you consume a treated chicken, you too are administered those same medications.

Rabies can be found in any animal, including raccoons. Raccoons and other game animals can also be infected with bacteria, viruses, and parasites that can cause illness in humans who eat the meat, depending on how the animal is handled and prepared. 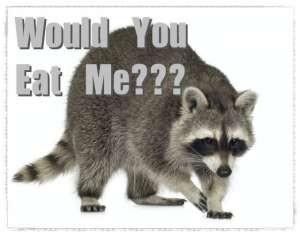 However, because of an increase in popularity of game meat, game is now being raised domestically for sale, and falls under a voluntary USDA inspection. It is possible to find USDA-inspected small game such as rabbit, beaver, opossum, porcupine, alligator, and raccoon.

In summary, as gross as it may seem to some, the health department states that selling raccoons to eat may or may not be illegal, depending on where the meat came from. We urge you to always be aware of where your meat and other food comes from. No matter how normal and safe it may seem to pick up some hamburger or chicken from your local grocer – if you don’t know where that meat has come from, you just cannot gauge its safety.

So, what’s for dinner at your house tonight?