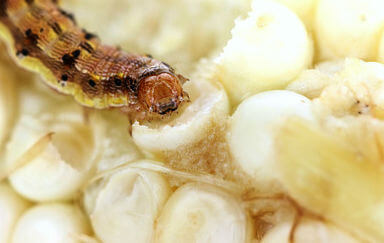 It’s happening: a strain of Monsanto’s Bt corn, engineered to protect against rootworms, has become ineffective, as the insects have already developed a resistance and are plaguing Illinois cornfields.

This confirms warnings issued by the Environmental Protection Agency and various anti-GMO groups that this would occur, making it much more difficult for farmers to deal with rootworms in the future.

A study performed by the University of Illinois and the Illinois Natural History Survey found that in certain areas of the state, Bt corn crops containing the anti-rootworm ‘Cry3Bb1’ protein have been greatly damaged by roundworms.

Michael Gray, a professor of crop sciences at the University of Illinois, says, “it looked like continuous corn and the use of the same trait year after year is what produced resistant beetles. Growers thought their get-out-of-jail-free card was just to rotate to soybeans. But what we’re seeing in northeast and east-central Illinois is beetles that are also resistant to crop rotation.”

The use of genetically modified Bt corn has long been a concern for organic farmers. Bt bacteria, in its unmodified state, is found naturally in the soil. A preparation of the weakened or dead bacteria is used by organic farmers to treat isolated areas of high infestation on an emergency basis.

When used organically, the toxin within the bacteria is not active until it reaches the gut of the insect. The Bt bacteria on the plants which is not consumed by insects degrades within one day, and any residue is easily washed off, as it does not penetrate the plant.

The Bt bacteria found in genetically modified Bt corn, however, is synthesized to manifest its active form in every cell of the GM plant. Consequently, insects receive constant exposure to the active toxin in their environment, which paves the way for the development of a resistance, such as the problem observed in Illinois.

What’s more, since the active toxin exists in every part of the plant, inside and out, it cannot be washed off. As the bacteria is not easily digested, it is likely to stay within the walls of the human gut, and the guts of any animals that ingest it.

The modification of Bt is just one more way that bioengineered agriculture is harming organic farmers. According to the anti-GMO organization, Beyond Pesticides, “organic farmers will be left without this important tool.”

The development of resistance to Bt corn in rootworms is not exclusive to Illinois. The Iowa Corn Growers Association’s director of research and development has reported the same problem in Iowa’s Bt cornfields, but the damage is not as extensive as in Illinois.

GMOs are harming organic agriculture and posing unnecessary risks to our health and the health of our environment. Isn’t it time we put a stop to this experiment? It is clearly not working.