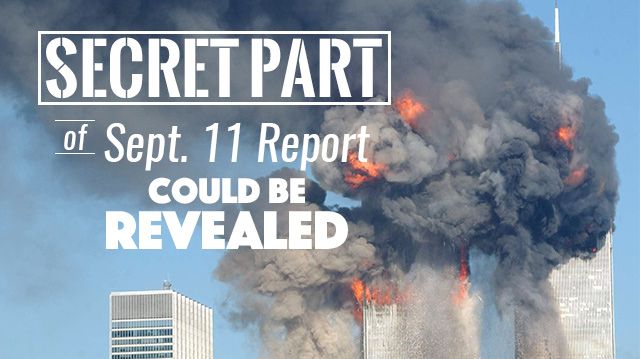 As President Obama visits Saudi Arabia, a former ambassador and congressman who sat on the 9/11 Commission is asking for the release of 28 pages that were not included in the final report. Those blacked-out pages could shed light on the Middle Eastern country’s role in the deadly terrorist attacks.

Former Congressman Tim Roemer appeared on MSNBC’s “Morning Joe” last week to argue that the public has a right to know what is in these missing pages, which supposedly focus on the Saudi role in the 9/11 attacks. While Roemer said the commission did not find any role by high-level Saudi officials in the attacks, he said it’s possible that financing in support of Al Qaeda came from Saudi sources.

The 9/11 Commission Report was released on July 22, 2004 and outlines the events leading up to attacks. The report was commissioned by President George W. Bush, and the missing 28 pages were withheld by his administration.

The missing pages were originally detailed in a report on the CBS program “60 Minutes” earlier this month. Roemer and others who have read them describe them as a working draft that lays out the possibility that Saudi officials provided assistance for two hijackers who later crashed airliners into the World Trade Center. That information was turned over to the 9/11 commission for further information, and some of the questions raised were answered in the final report.

Commission chairmen Tom Kean and Lee Hamilton released a statement denying any Saudi “smoking gun,” saying that the material they withheld was “raw, unvetted material that came to the FBI.”

“The 28 pages were a summary of some of those reports and leads, as of the end of 2002,” the statement read. “Before completing its work, the congressional panel never had a chance to check out any of these leads. The 28 pages, therefore, are comparable to preliminary law enforcement notes, which are generally covered by grand jury secrecy rules. Those rules exist to avoid implicating people in serious crimes without the benefit of follow-up investigation to determine if such suspicions are substantiated.”

In addition, other officials told NBC News that the pages would only detail information already known to the public. “The pages provide no further answers about the 9/11 attacks that are not already included in the 9/11 Commission report,” said Philip Zelikow, executive director of the commission. “I’m afraid they will only make the red herring glow redder.”

The statements have done little to quiet the calls of the pages’ release from Rohmer and others. In an Op-Ed published on CNN, Colleen Kelly, co-founder of the September 11th Families for Peaceful Tomorrows, argued that the facts of the 9/11 attacks are still not available and that the public deserves to know what was in these pages and why they were withheld. Even chairmen Kean and Hamilton agree somewhat on this point, saying that we still don’t know what the two hijackers were doing in Los Angeles in the weeks leading up to the attack, and who may have helped them.

President Obama spoke with “CBS This Morning” co-host Charlie Rose on this matter and said that Director of National Intelligence James Clapper has not decided whether the information can be released to the public at this time, though Clapper is reviewing the material. According to Obama, that process is close to completion. When asked whether he has viewed the pages, Obama simply answered “I have a sense of what’s in there.”

The push for the release of the missing pages has obscured bigger questions, according to Zelikow. For example, he thinks it’s imperative to find out what 9/11 mastermind Khalid Sheikh Mohammed, who is currently in U.S. custody, has been hiding about the global Al Qaeda network that he oversaw. Other senior U.S. law enforcement officials confirmed to NBC News that there is still a lot of mystery around the mastermind’s network, especially on members who may have operated in the United States.

What do you think? Should the missing 28 pages be released to the public or is there some information that should be kept private?