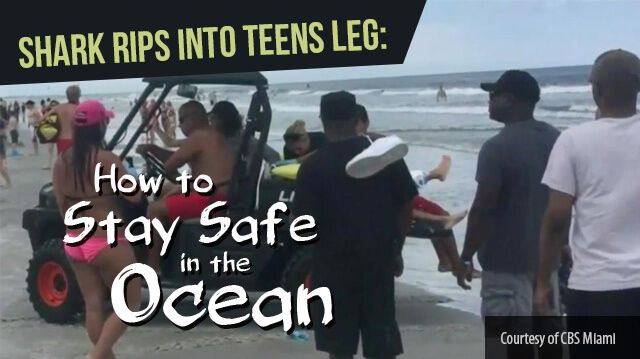 Sharks have a reputation as being bloodthirsty killing machines, a view reinforced by movies and sensationalism. But after a 13-year-old boy was seriously hurt in a shark attack at a Florida beach recently, some are left asking the question: How safe is the ocean, really?

Predator in the water

The shark attack took place at Neptune Beach near Jacksonville at approximately 2:55 p.m. It left the teen with huge gash in his right calf. The eight-inch wide laceration was consistent with a five- to six-foot long shark, Neptune Beach police told NBC. Over the last half-century, there has been an increase in unprovoked shark attacks in Florida, and more between 2 p.m. to 3 p.m. in the afternoon than any other time of the day, according to National Geographic.

The injured teen was transported to a local hospital, where he remains in stable condition with non-life threatening injuries, according to police. “Bites of this nature are extremely rare for our area,” police said. Nevertheless, they urged beachgoers to “exercise caution” in the water.

Sharks get a bad rap

Being bitten by a shark is actually quite rare: Your chances are 1 in 3.7 million, to be exact, according to National Geographic.  Each year the United States we average 19 shark attacks with one shark-attack fatality every two years. If you think that’s a lot, then think about this. For every human fatality that occurs because of sharks, humans kill approximately 2 million sharks.

The yearly average of unprovoked shark attacks on humans in the world is 75, resulting in approximately 10 deaths. These worldwide figures are small considering the millions of humans that enter the water each day. You have a higher chance of dying from a bee sting, a dog or snake bite or even a lightning strike than from a shark attack, according to the Florida Museum of Natural History.

Yet, you can still take precautions

Chances are fairly slim that you’ll be attacked by a shark anytime soon. But there are still precautions you can take each time you consider frolicking in waters where sharks may be present naturally.

Unprovoked shark attacks do happen, as was the case with the teen at Neptune Beach. And there’s no disputing sharks do kill, but people are much more devastating to sharks than they are to us.

How do you feel about swimming in the ocean? Are you more frightened now in light of the recent shark attack?