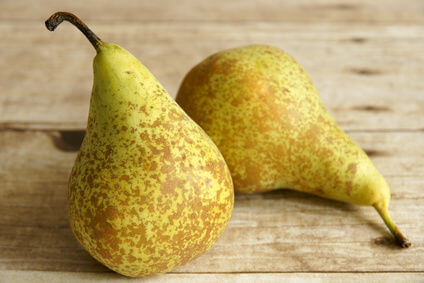 A study performed at the University of Missouri has found that silver nanoparticles, commonly used in pesticides, packaging, water treatment, cosmetics and preserving foods, can stay on the skin of produce, and penetrate into food, even after repeated rinsing.

Silver nanoparticles are tiny particles of silver, measuring between 1 and 100 nanometers in size. Silver has been used for hundreds of years for its antibacterial properties. The use of nanoparticles in todays world, including the food industry, is widespread.

These nanoparticles are also used on clothing and other textiles, disinfectants, and even children’s pacifiers and toys, among a huge range of other applications.

The University of Missouri study, led by Mengshi Lin, consisted of soaking pears in a silver nanoparticle solution, similar to the way a pesticide containing the nanoparticles would be applied. After soaking in the solution, the pears were washed and rinsed several times.

When the pears were tested four days later, the researchers found silver nanoparticles still clinging to the skin. Even more disturbingly, the smaller particles had penetrated into the pear pulp.

Despite the ability of silver nanoparticles to destroy microorganisms, many researchers are growing concerned about their safety, to both humans and the environment. One study, performed at the Norwegian Institute of Public Health, found that silver nanoparticles were toxic to cells, either suppressing cell growth, or causing cell death, depending on exposure levels and duration.

He adds, “this study provides a promising approach for detecting the contamination of silver nanoparticles in food and other agricultural products.”

The potential hazards of silver nanoparticles are not limited to human health. Benjamin Colman, a postdoctoral fellow in Duke University’s biology department, as well as a member of the Center for the Environmental Implications of Nanotechnology (CEINT), has performed field studies on the nanoparticles, with some worrying results.

Colman writes, “our field studies show adverse responses of plants and microorganisms in a replicated long-term terrestrial environment following a single low dose of silver nanoparticles, applied by the likely route of exposure, sewage biosolid application. An estimated 60 percent of the average 5.6 million tons of biosolids produced each year is applied to the land for various reasons, and this practice represents an important and understudied route of exposure of natural ecosystems to engineered nanoparticles.”

These studies clearly display that our modern technological methods of agriculture and manufacturing may have serious implications, many of which are still unknown. Just one more reason to go organic, and to know where our products are coming from, and what they are made of, whenever possible.