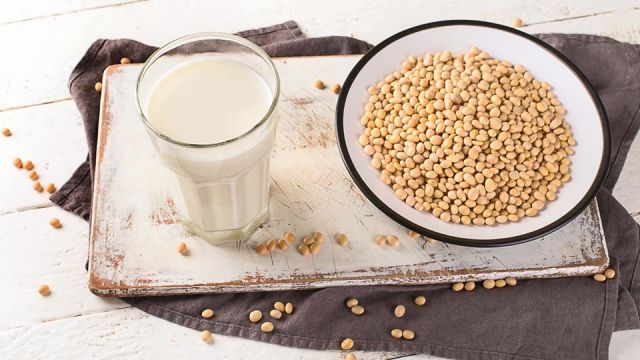 Soy milk is often touted as being a healthy alternative to cow milk. But is it really? Soy, after all, is highly controversial. And up until recently, there’s been little research comparing the pros and cons of each. But now a new study has compared the four most-commonly consumed types of plant-based milk. Let’s see how soy fairs nutritionally compared to almond milk, rice milk and coconut milk.

Dairy alternative milks taste good and generally don’t come with the same problems some people experience with cow’s milk. They’re also hyped as being healthy and wholesome for those who are lactose-intolerant. But there’s never really been much research done to compare the benefits between plant-based milks — until now.

A study from McGill University in Canada, published in the Journal of Food Science and Technology looked at milk beverages from plant sources around the world. These included almond milk, soy milk, rice milk and coconut milk. They compared the nutritional values of unsweetened versions with those of cow’s milk — based on a one-cup serving. Here’s what they found…

Did you know that cow’s milk is one of the most common allergies among infants and children? It even affects children more than peanut and nut allergies.  However, up to 35 percent of these infants outgrow being allergic to milk by the age of five to six years according to Food Science and Technology. Milk allergy may produce severe cellular damage and even trigger physical, mental and emotional symptoms that can vary in intensity and severity.

If your lactose intolerant, you’re either deficient, or lacking the enzyme lactase in the digestive tract. And you’re not alone. It affects about 15 to 75 percent of all adults depending on their race, eating habits and gut health. It’s for these reasons —  as well as being vegan or even a vegetarian, of course —  that there has been an increased demand for plant-based alternative milks around the world reports the study.  But there is only one alternative milk closest to cow’s milk when it comes to nutrients suggests the study.

Rice milk is lactose- free and can act as an alternative for those suffering from soybean and almond allergies. Calorie-wise, it is comparable to cow’s milk, but it lacks protein. Additionally, rice milk does not contain calcium, so generally it is fortified with calcium during the manufacturing process. Apart from the high carbohydrate count, rice milk offers a sweet taste but little nutrition says researchers. So, unfortunately rice milk is not the best plant-based alternative to cow’s milk.

Compared to cow’s milk coconut milk is few calories but no protein. However, what calories it does have comes mostly from fat. But that’s not a bad thing since coconut milk contains beneficial fat called lauric acid. Lauric acid is a medium-chain fatty acid that’s easily absorbed and used by the body for energy. Additionally, these fats will not raise your cholesterol levels nor cause heart damage. Instead, coconut milk may help you lower cholesterol levels, improve blood pressure and help prevent heart attacks or a stroke. However, if stored for over two months, coconut milk loses its nutritional value.

Almond milk is made by blending almonds with water and then straining the mixture to remove the solid pieces. It has a nutty taste and creamy texture similar to cow’s milk. When it comes to cow’s milk, almond milk is low in calories, low in protein and low in carbs. And, to make up for lost nutrients, most manufacturers enrich almond milk with vitamins, minerals or protein and calcium according to Medical News. While many studies link whole almonds to a variety of health benefits, those benefits do not apply to almond milk. And of course, if you have an almond allergy you may want to steer clear from this alternative milk product.

This brings us to soy milk

Soy, according to the McGill University study, is the best plant-based alternative to cow’s milk. Why? Because soy milk has been an alternative source for cow’s milk for four decades and has the most balanced nutritional profile of all the four milks say researchers. It is also widely consumed for the phytonutrients — known as isoflavones — present in the milk. These phytonutrients have anti-carcinogenic properties which may help prevent or delay cancer. But there is a downside. Many people can’t stomach soy milk thanks to the “beany flavor.” There’s also a concern about the presence of substances in soy that reduce nutrient intake and digestion. Nevertheless, it is a great source of protein and usually fortified with essential vitamins and minerals.

But choose a quality soy milk

If you choose soy milk, pick a brand made with real soybeans. Fresh soy milk is best. However, if you can’t find it at your local health food store then choose whole-bean soy milk to avoid soy milk made from soy protein or soy isolate, suggests Dr.Oz. Additionally, check the expiration date. The further out the expiration date, the more likely the soy milk contains additives to extend its shelf-life. Check the label for hidden or added sugars like “brown rice syrup” or “evaporated cane juice.” If sugar is first on the list, then one cup of soy may just be too high in calories. In the end, you have to choose a milk that best suits your health needs. If you’re looking for a plant-based milk that compares to cow’s milk, soy may be the best alternative.