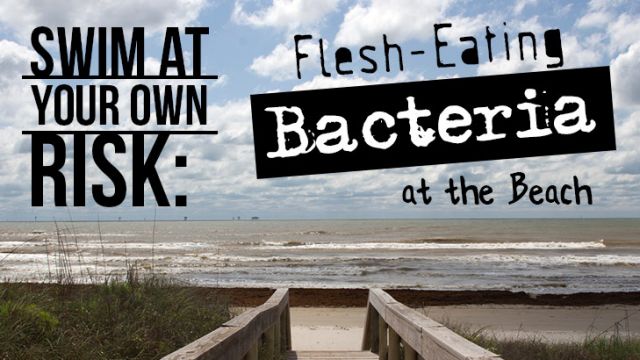 A day at the beach turned into a nightmare for a Galveston, Texas man after contracting a rare and potentially fatal flesh-eating bacteria. Now his family is left asking how, and why there were no signs posted to warn beachgoers. How can swimmers avoid these risks at our beaches?

A dangerous day at the beach

Recently, 50-year-old Brian Parrott spent time with his family at Galveston’s West Beach. Little did he know that a scratch on his foot would become infected with flesh-eating bacteria. Parrott sat at the water’s edge with his granddaughter and swam in the water with his son, according to his mother, Donna Dailey.

Parrott is angry, naturally. Had he known the water was that dangerous he never would have put his granddaughter in it, Daily told ABC News.

His leg now amputated below the knee, Parrott is fighting for his life as doctors try to stop the infection from spreading to other areas of his leg. The type of flesh-eating bacteria contracted by Parrott is called vibrio. There are two ways to contract it, when an open wound is exposed to contaminated water or by consuming raw or undercooked shellfish.

Apparently, Parrott was infected after swimming in the ocean. He also has diabetes, according to Daily, which makes him more susceptible to this type of infection.

What you need to know about flesh-eating bacteria

Vibrio bacteria live naturally in certain coastal waters. The risk of contracting vibrio is higher during the warmer months, from May to October. Some species cause skin infection when an open wound is exposed to salt water, similar to the way Parrott became infected. But what places you at a higher risk is having chronic liver disease or diabetes.

In addition, just swimming with an open wound in salt water may increase your chance for getting vibriosis, according to Centers for Disease Control and Prevention (CDC).

The CDC estimates that vibriosis causes 80,000 illnesses each year in the United States. Approximately 52,000 of these illnesses are estimated to be the result of eating tainted seafood, which also can cause the flesh-eating disease.

If you’re healthy, have a strong immune system and practice good hygiene and proper wound care, your chances of getting flesh-eating bacteria are extremely low, says the CDC. Unfortunately, vibrio bacteria is not easily identified through routine testing, so many cases go unreported.

How do you know if you have it?

Symptoms of severe bloodstream infection — more likely in vulnerable individuals — can happen quickly after eating tainted seafood and include sudden chills, fever, shock, decreased blood pressure and skin lesions on the limbs and trunk of the body. There is a 50 percent risk of severe complications and death in high-risk individuals who develop blood infection, according to State Health Services.

How to avoid flesh-eating bacteria

The most often reported species, vibrio parahaemolyticus, is to blame for 45,000 illnesses each year in the United States. To reduce your chance of getting vibriosis, the CDC and Texas State Health Services recommends you take the following precautions:

Swimming at beaches with pollution in the water or in the sand can make you ill, reports the Environment Protection Agency. In the event that beaches are closed or advisories are posted, there’s a good chance harmful bacteria, viruses, protozoa or parasites are present in the water, says the EPA.

Parrott’s mother said his infection has cost him his career in security and wonders what will happen next. Had a sign been posted notifying beachgoers that the bacteria in the water were high, he could have chosen not to swim.