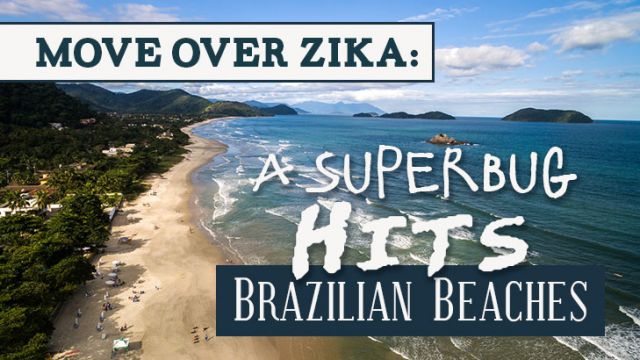 Masses of athletes and millions of spectators are heading to Brazil for the 2016 Rio Olympic Games starting on Aug. 5. As Brazil scrambles to gain control of a mosquito-borne Zika virus outbreak, now they have to contend with a new superbug lurking in Rio’s waters.

Just under two months from the opening of the 2016 Rio Olympic Games, scientists have found a dangerous drug-resistant “super bacteria” in areas that will draw thousands of Olympics fans to scheduled events, reports Reuters. Two unpublished studies disclosed to the newswire suggest that hazardous microbes normally only found in hospitals and which may be antibiotic resistant are found in and near the country’s beaches.

The report also claims that Rio’s sewage-infested waterways are unsafe. The bacterium is said to cause urinary, gastrointestinal, pulmonary and bloodstream infections and meningitis. Most frightening, the Centers for Disease Control says the bacterium can kill up to half of people infected.

A study published in 2014 previously has found this super bacterium on one Brazilian beach set to host sailing and windsurfing events this summer. The latest studies indicate that the same bug is now present at five other popular Rio beaches, including Copacabana, which is set to host triathlon and open-water swimming events. The other beaches reportedly affected include Ipanema, Leblon, Botafogo and Flamengo.

How they enter your body

Depending on the state of your immune system, infection may be an immediate threat or potentially lie dormant, scientists consulted by Reuters said. Once the bacteria enter the body, it can wait and attack later when the immune system is compromised by an unrelated illness.

These types of super bacteria not only infect humans but also change normally harmless bacteria naturally present in the waters, turning them into antibiotic-resistant germs. And it looks as if there’s little that can stop them. If anything, it’s getting worse, says Valerie Harwood, an expert in recreational water contamination and antibiotic-resistant bacteria at the University of South Florida not involved in the studies.

How can we protect ourselves from superbugs?

Before you lose too much sleep over potential superbug threats, consider this: Even though we’re all at risk, the chances of catching a drug-resistant bug outside of a hospital remains fairly slim for the average healthy person, Dr. Wendy Stead, an infectious diseases specialist at Beth Israel Deaconess Medical Center in Boston, told PBS Frontline.

Try to live a healthy lifestyle to reduce your need to be in a hospital, says Dr. Brad Spellberg, an infectious diseases specialist at Harbor-UCLA Medical Center. Also, keep your home and work space clean. Wash fruits and vegetables carefully and cook other food properly, to reduce your chance of ingesting harmful bacteria.

In the end, you may not even know you have a superbug. And, unfortunately, your doctor may not know either — at first, says Spellberg. There are some signs that an illness might be more serious, such as fevers accompanied by chills that get worse instead of better.

If you do suspect you have an infection, don’t rush into an emergency room or walk-in clinic, potentially exposing others. Instead, call your primary care doctor first for advice.